This engaging woman was on my wish list of people to interview long before the Jolie gene became public. Why? Because her attitude is compelling.

Barter grew up hearing generations of women in her family were ‘cursed.’ Breast and ovarian cancer had affected twenty-five of her relatives. Her great-grandmother died at 68, her Nan Val was diagnosed at 44 with breast cancer and her mum Julie was diagnosed at just 36.

At 22 years old Krystal tested positive for the BRCA1 gene fault. She may have inherited the gene but she also inherited the tenacity and intelligence to change the course of her life.

Martine Harte: Krystal how did you react when you discovered what was really happening to the wonderful women in your family given your mum and your nan were among the first women to have the BRCA testing in Australia? It must have been terrifying when both tested positive to the rogue gene and had double mastectomies.

Krystal Barter: At that time, at 18 years of age I wasn’t ready for that kind of information. I was a bit of a delinquent and knew that if I had that information it would only send me off the rails even more. So I made the decision not to have the gene test. I fell pregnant at 20 to my amazing husband, whom I have three children with. That was a big shock: I was not ready to have a baby at 21, and I did and it changed my life. Not only did the baby make me a better person, he enabled me to see the gene test and subsequent BRCA positive as a gift. It was a piece of paper that gave me this option to be pro-active and vigilant.

Krystal’s risk of developing breast cancer was anywhere up to 85%. She started high risk screening at just 23 years old. Every six months she would steel herself for the possibility that doctors would confirm her worst fears. The young mother felt her life was spinning out of control.

Krystal Barter: So I was 25 when I went for my last high risk screening. I’d made the decision to have a preventative double mastectomy after three years of soul-searching and Google searching. I went in and said at the top of my lungs, “This is my last mammogram! I’m so excited, no pancake boobs anymore!”

But this mammogram was far from the usual routine.

Krystal Barter: I went into (the doctors) room and she had this solemn face and she said, “Krystal, we’ve found changes, linear lines of calcification, which is indicative of early breast cancer. In your case we are rushing you upstairs for an early biopsy.” I said, “No way you’re not, take them now.”

Two weeks later she underwent radical surgery. Despite having the unwavering support of her devoted mum, Krystal couldn’t find any local information. So recovering from her preventative surgery she used her nous to start Pink Hope, an online community offering a safe haven of support and tangible resources for high risk women.

Krystal Barter: It was like life had begun. I had seen the positive in what I’d been through and the choices I’d made and the options I had, instead of this cloud that was constantly hanging over me. It was an opportunity to help others and to ensure we weren’t falling between the gaps.

I’ve read there’s not one day that you’ve woken up and felt sorry for yourself?

Krystal Barter: I honestly love my breasts now more than I loved my old ones. They feel like they are the ones I’m meant to have, they are the healthy ones that aren’t going to make me sick. I got to feed my babies; my breasts lured my man. So they did their job and now it’s kind of like these are the ones I’m meant to have. They’re cold but I look at it with humour because if I looked at it everyday and felt sorry for myself it would be an injustice to women out there who are fighting for their lives.

When you made the decision that yes, Pink Hope was going to happen, what skills did you employ to get the ball rolling?

Krystal Barter: (laughs) Seriously I’d never done a website in my life. I spoke at an event and told a crowd that this is what I want to do and up pops someone’s hand, “We own a website company, we’ll do your website”, “We own a printing company, we’ll get your first letterheads.” It was just a room of people who believed.

We still don’t have philanthropists giving us millions. I started it from my own wardrobe.  I’m still the only one running it and we do need help and it’s that thing where our charity doubled in size five days after the Angelina story broke. We had people connecting to our charity from every corner of Australia. She gave us a huge gift, she indirectly validated our charity and what we stand for.

Was there anything lost in the recent conversation that you want to draw our attention to?

Krystal Barter: Yes, with the majority of BRCA genes, the majority of families are inconclusive so they don’t know what gene they have. So it just hasn’t been found yet. So I just don’t want people to think that if they don’t carry the BRCA gene that there isn’t a place for them. You can carry it through both your mothers and your father’s sides.

What do you know now that you wish you had have known at the start of this entire journey?

Krystal Barter: That it was all going to be okay. All I wanted was to talk to someone who had been through it, not someone in my family, and for them to go, “You’re not going to look disfigured, you are still going to find yourself beautiful and strong and don’t be scared.” I was scared of leaving my family, of getting sick and my life revolved around it in a negative way. I’m trying to change that for others because all I wanted was for someone to hold my hand and tell me it is all going to be okay. And it is.

My life could have ended up very different if I didn’t have my first baby. I was already dabbling in drugs. I could have been a very different person. There is a reason for everything. Pink Hope at times does become tiring and I miss out on time with my family but I believe funding will come. You have to manifest it. 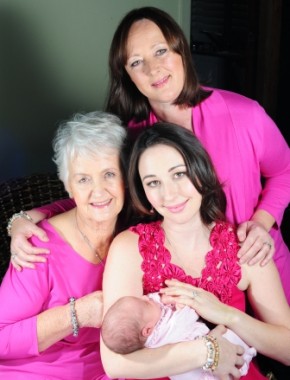 You can find out more about the petition, her good work or donate to The Pink Hope Foundation here