Earlier this year I went to a dinner party and met a woman whose story deserves to be shared.

Ann Billington is a mum of three boys.

Her youngest, five-year-old George is known as an “adorable kid” who makes a positive mark on many.

George was diagnosed with cancer a few months before his fourth birthday; doctors found a 22cm tumour on his liver.

We all know this disease is brutally unfair.

But what struck me at that dinner party was this: Ann Billington is a fighter. A lioness protecting her baby.

She knows what it feels like to live on the edge and hopes sharing her experience with this often misunderstood disease may lighten the load for others.

Martine Harte: Ann can you please take us back to when George was first diagnosed?

Ann Billington: George was diagnosed in March 2013, he had a dummy, carried a blankie, just a little boy.

He couldn’t really articulate what was wrong, he had a bit of abdominal pain but that would pass, then he’d go off his food and then he’d be ok. One day he had no energy, next day he’d run around the block, so very intermittent for a few weeks.

I did take him to the doctor several times. They told us they thought he had a virus and that it should improve in 10 days. Take to emergency if stabbing pain escalated.

I didn’t take him to the emergency room because I didn’t think it was an appendix.

For two weeks doctors said it was a virus, it will go away. I didn’t push for any more tests because I didn’t know what they were or what I was allowed to.

None of us want a ‘paranoid’ parent, but I sat with that for two weeks.

I think intuition is a huge thing.

How has it affected you as a woman?

Ann Billington: I came to Australia without my family: without my friends fifteen years ago. I became a stay-at-home mum for ten years, I did start to lose bits of myself and I forgot what I was like before I was a mum and in my comfort zone.

On my way to the hospital, all of my old strengths came out. All the things I was good at just started shouting.

I just took control, I started organising everything, writing everything down. I asked questions, I did not just accept the medical advice I was being given, ‘to just go home and be with him.’

As a woman it seemed to bring out my strengths. I think it was truly the mother in me, but it actually made me quite strong and alert.

You wrote: ‘we make the most of every beautiful moment, in our house we laugh louder, we kiss more, in our house we dance. You appreciate everything you have to the fullest and take nothing for granted. Profound words..

Ann Billington: My oldest boy is twelve and the other night he put little George to bed, he was reading him a book and by the time I put the dishes away they were literally arm in arm, cuddling in my bed. He is twelve and he is five and I can’t explain to you it’s just they appreciate what they have, they appreciate each other. We had to tell those two little boys, that their brother might not make it.

I have a friend who also has a young daughter undergoing treatment – a beautiful, brave girl – she hopes the gold ribbon of Childhood Cancer Month  is one day as widely recognised as the pink one?

Ann Billington: I just feel people don’t understand what families go through and how this diagnosis lives with them forever. I never stop worrying about the health of my son or about the cancer returning. We can never fully relax.

When we were at the point where we could ask for support, there was nobody around us, many had taken a step back and struggled with knowing how to help. When we finally had the strength to get out and about, we would get stared at.

People would literally move away from him.

I will think, ‘oh my goodness you are much more of a risk to him, than he is to you.’

The general public lack knowledge about Childhood Cancer and I believe it is not talked about enough therefore creating huge amounts of fear and helplessness. 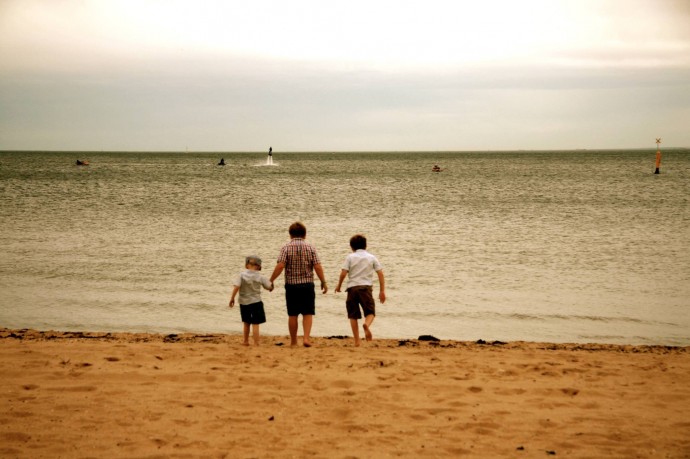 Editors note: Ann previously worked as a psychiatric social worker before she came to Australia. She has now met with the head of oncology to develop the psycho-social program at the Royal Children’s Hospital in Melbourne.
Thanks to Ann’s advocacy, stress reduction therapy and a psycho-trauma team will now be available to families.
Please join me in wishing Ann and her beautiful family all the very best.
Martine.
Main image credit: Zoe Mongey.
Children’s Cancer Institute Australia | About us | Curing childhood cancer | Childhood cancer statistics
About Childhood Cancer:

Martine’s note: George Joseph Billington left this world for a much better place on 27/02/16.

St Agnes Catholic Church was packed with mourners from around the world for a beautiful service that I was lucky to attend.

My heart goes out to Paul, Ann, Max and Nate.

These words perhaps sum it up the best.

We cannot judge a biography by its length,

Nor by the number of pages in it.

We must judge it be the richness of its contents

Sometimes those unfinished are among the most poignant.

We cannot judge a song by its duration

Nor by the number of its notes

Sometimes those unfinished are among the most beautiful.

And when something has enriched your life

And when its melody lingers on in your heart

Or is it endless?