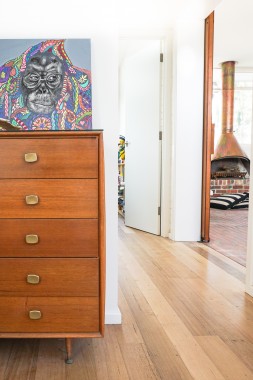 Welcome to the home of someone who turned her dreams into reality. Carla Murley Mebourne milliner.

(I know, I know, Engaging Women is a magnet for these types)

Carla Murley of Murley & Co is a talented milliner who also happens to be at the pointy end of a six month renovation on the mid-century Beaumaris home she shares with her husband Troy and two children.

On this shoot I discovered a striking, tactile family abode. It’s a far cry from the mustard shag pile and bad drapes they were greeted by at the first viewing. 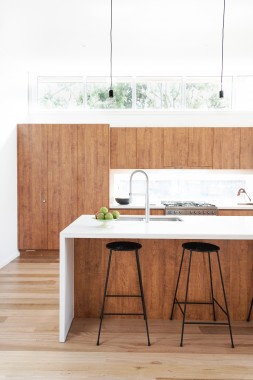 “We had a five month settlement so we spent a lot of time on Pinterest and we kept coming back to this one image of a kitchen that had repetitive timber patterns, no handles, white Caesar stone. I had a great kitchen designer who worked with all my Pinterest images and this is what happened.” says Carla. 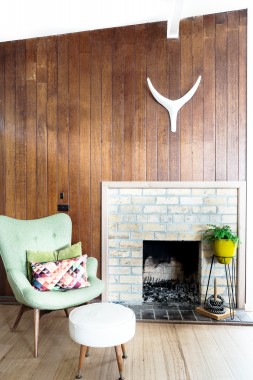 Featherstone chair was a gift from her husband when they renovated their last mid-century home, whale tail on panelling is from Seminyak, the fireplace was rebuilt after a gas heater was removed. The beautiful wood panelling is still a work in progress. Photo – Changwei Dean. 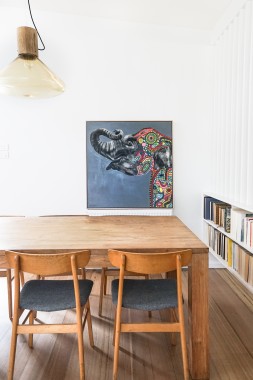 The Czechoslovakian light above the dining table was the most exy purchase.

“There’s a place that imports them in Melbourne called Relax House, it’s called a ‘Brokis muffin’ hand blown glass; one of the biggest purchases for the house. We sat on it for about six months and then decided if we didn’t do it I’d always be looking at whatever light we put up there and be wishing it was the Brokis muffin,” recalls Carla. 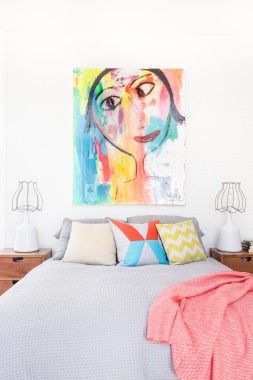 “Four weeks after we started the renovation we were dismayed – the roof was off, everything was waterlogged – so we went to the Canterbury art show with Fiona Slater and we spotted this painting. Unbeknownst to me my husband bought it,” says Carla. 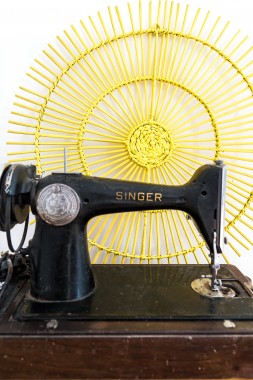 Plans are afoot to restore this Singer sewing machine, which has pride of place in the master bedroom. Photo – Changwei Dean. Production – Martine Harte. 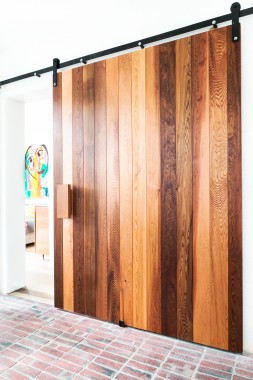 This fab sliding door is Carla’s favourite moment in the house. It is prefab on the inside; her “talented builder” from AML Boutique Builders lined it with cedar and handcrafted the handle. Photo – Changwei Dean. Production – Martine Harte. 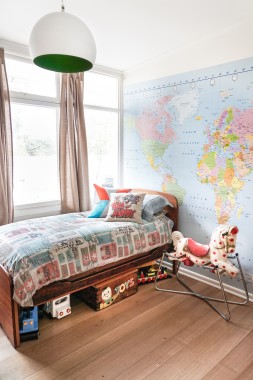 The vintage rocking horse was a present for Carla’s brother.  “I have somehow managed to scam him, I’ve said I will give it back when he wants it back, but he’s still here, he’s so cute. I have images of me as a baby riding it,” laughs Carla. 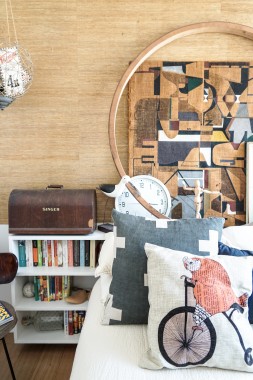 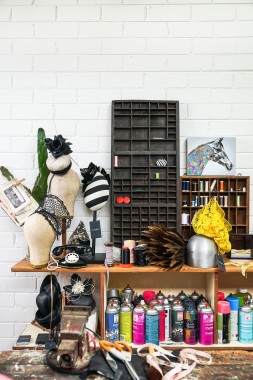 Like so many of the women I feature on this blog, Carla hit her stride after the birth of her first child. She was running a children’s head ware business when she spotted master milliner Richard Nylon’s work during Spring Fashion week.

A quick Google search revealed he was teaching at the Melbourne Fashion Institute in Fitzroy, so she signed up for a course and the rest is history.

“When I was in my early 20’s I was surrounded by talented musicians and artists and there was no way my creative streak was coming out when I was around such talent! After I had kids I said, “Who cares! If I can give birth in three hours and nearly do it in the car I can start my own business and I can be creative!” 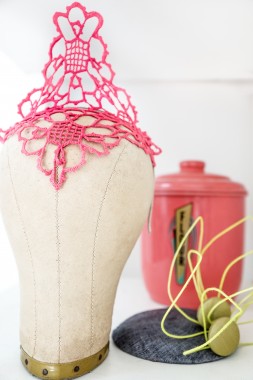 Carla is very discreet about her clientele (which includes actresses and fashionistas) but she’s all about making every woman feel beautiful.

She offers a hat hire library if you like to mix up your Spring Racing looks.

Thanks for having us Murleys.