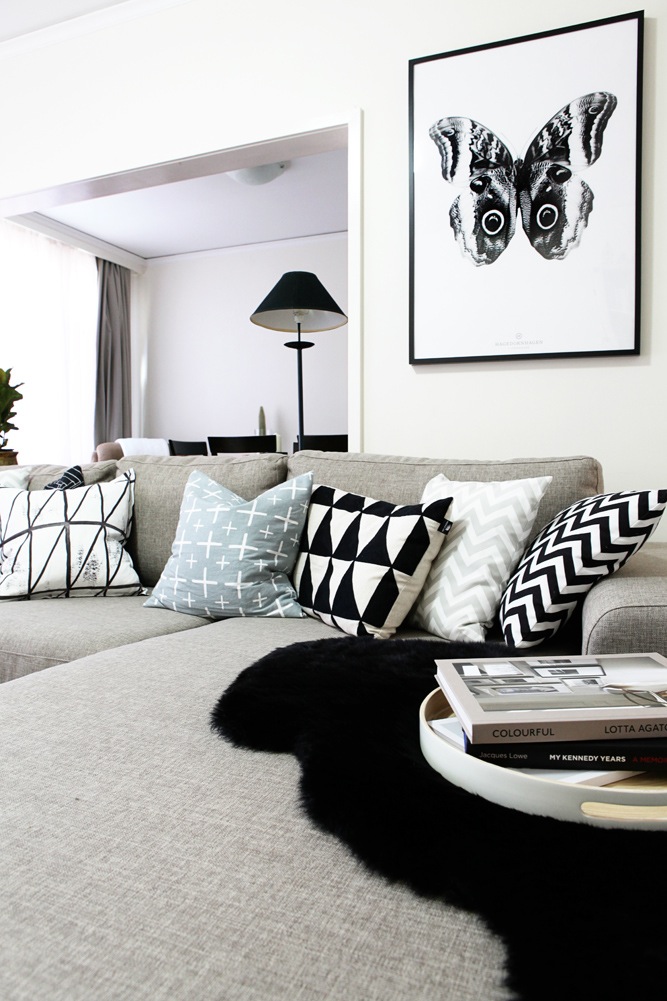 It’s easy to shut the world out when you step inside the home of visual merchandiser and interior stylist Heather Rivendell.

It exudes effortless calm thanks to a restrained palette and design choices. 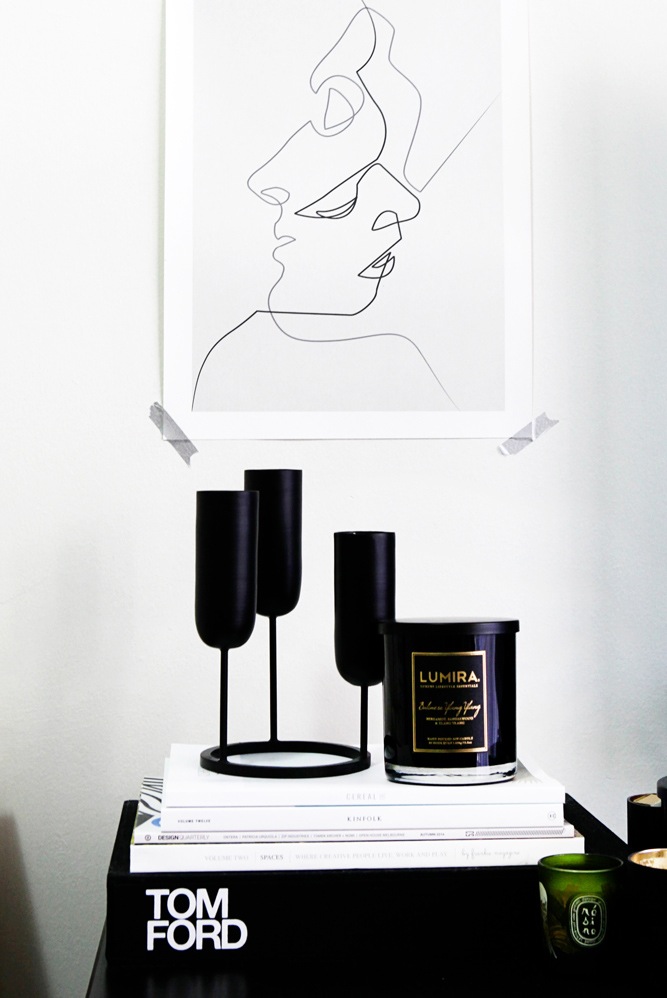 Heather and her IT/musician husband Joel have been in the apartment (in Melbourne’s leafy Malvern) just eighteen months and say they were seduced by the layout.

“We just love the space, it doesn’t sound all that glamorous but for this area it is quite rare to find an apartment of this size. I love older buildings rather than the new shiny ones (I’m not really down with those) I love how the door handles in our home are rusted and gold; it was actually built in the 80’s,” she says. 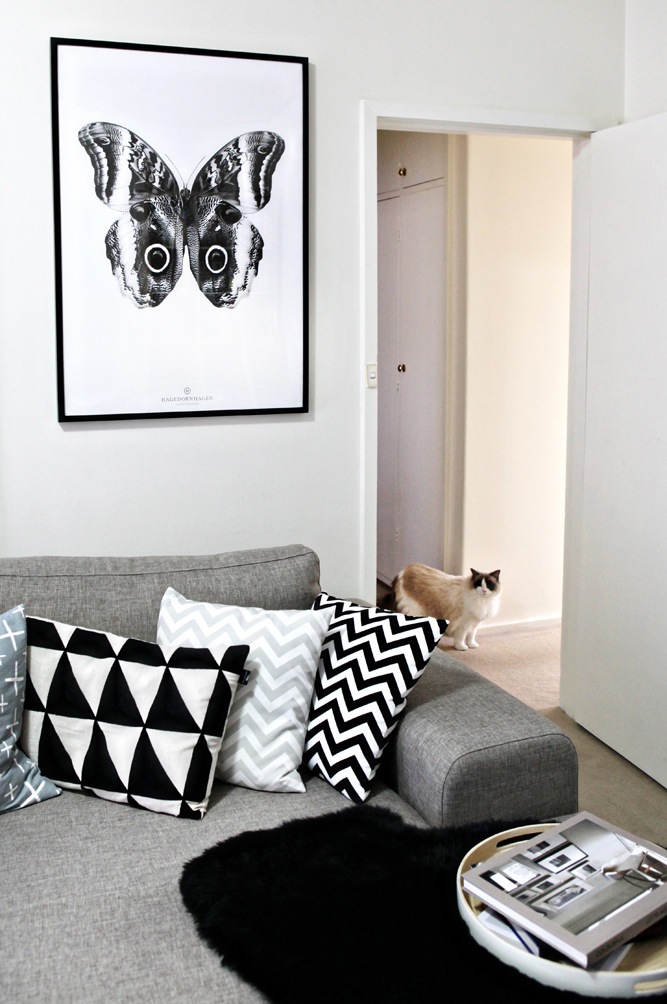 Stunning print of an exotic butterfly is the newest addition to the home. ‘Precious’ the rag doll keeps an eye on us in the hall. Throw by Kate and Kate. Photo – Tania Savage Production – Martine Harte.

Heather is the conceptual visual merchandiser at French inspired clothing label Blue Illusion; responsible for everything from store windows to styling videos. She also works with brands on her various social media accounts.

She’s been with her husband Joel for fourteen years and married for four, they met in pretty special circumstances.

“We used to manage a wedding band together. We actually met in a cover band (a Robbie Williams cover band – so silly) He’s a guitarist and I’m a singer, we’ve both been so busy it’s sort of fallen a bit but yeah that’s his outlet, he absolutely loves it,” she laughs. 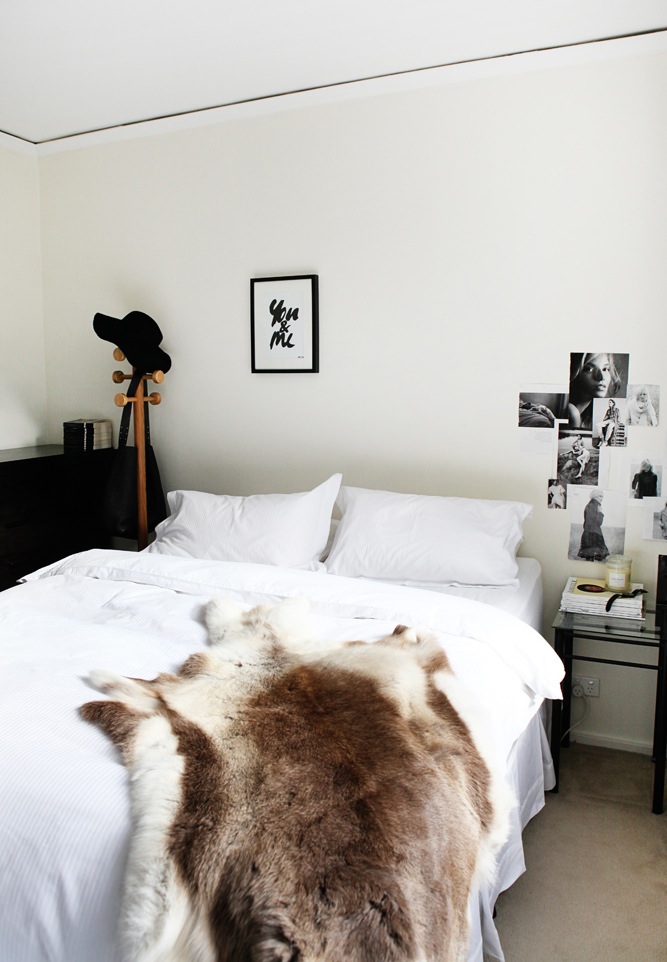 Heather styles up the master bedroom with tear sheets out of magazines and (like all good stylists) knows her way around a strip of blue tack.

She also employs asymmetry – TIP: you don’t have to balance a composition for it to look good.

“I put these black and white images up for a shoot when I was photographing some products and I’ve just left it there. I like my room feeling fresh, it’s just one of those places that I’m only in when it’s dark so I love having it bright and light. White linen also helps create the illusion of more space,” she adds. 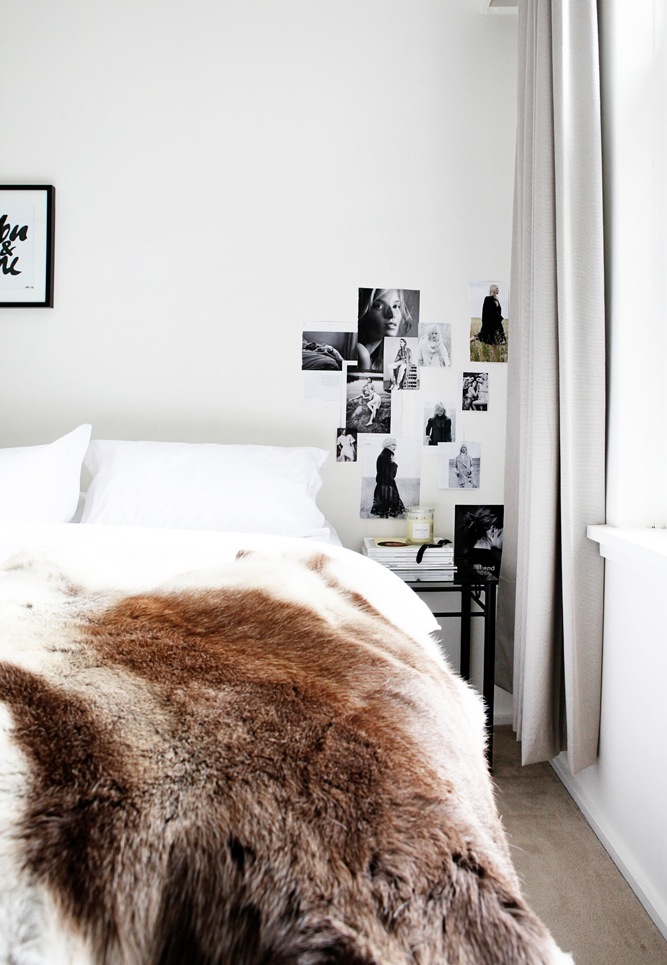 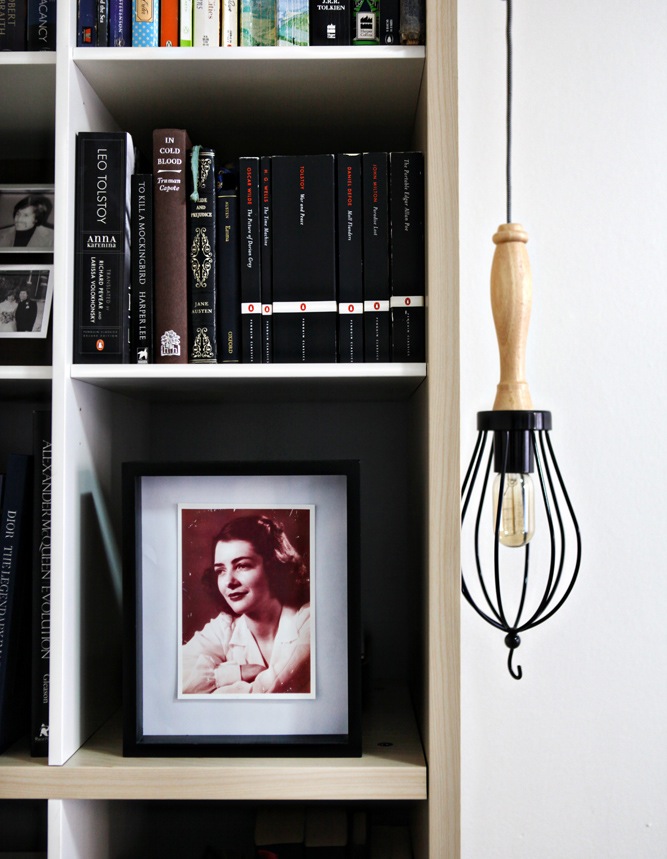 “They lived in LA and she (Heather’s grandmother) unfortunately died when my mum was a teenager. They’d go on holidays and rub shoulders with movie stars like Carey Grant, my mum was even baby sat by Debbie Reynolds. So yes it was a very glamorous neighbourhood!” 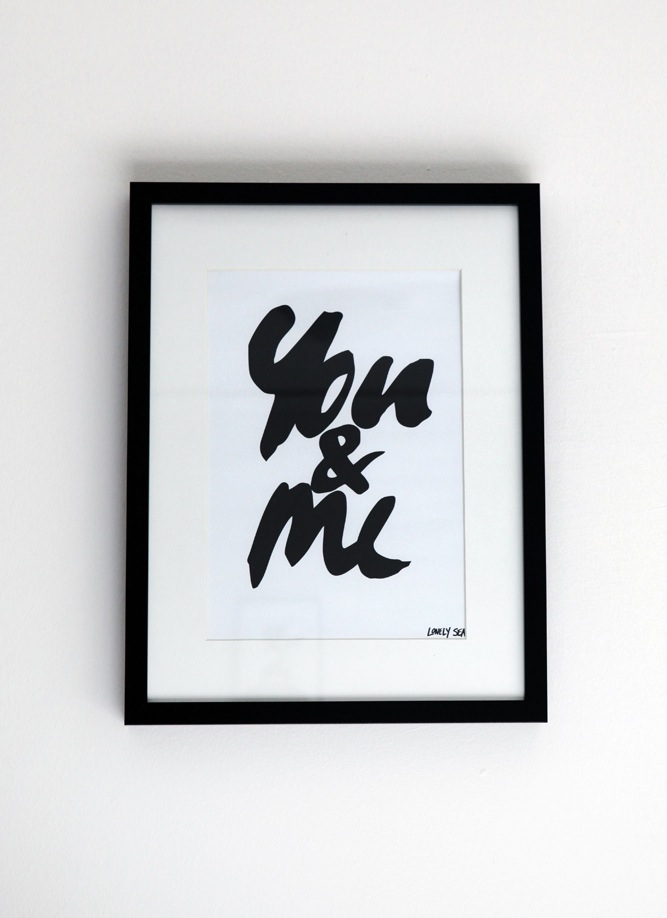 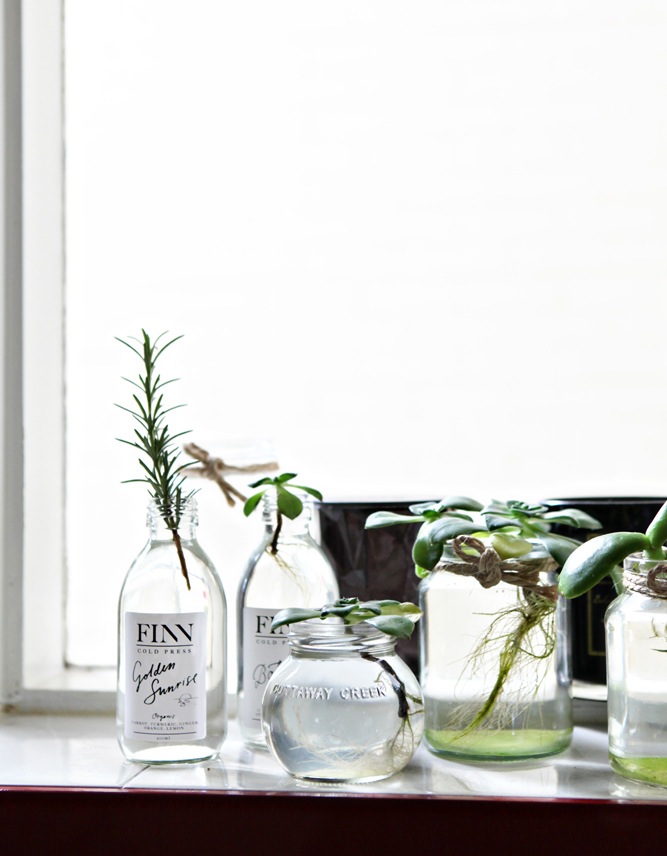 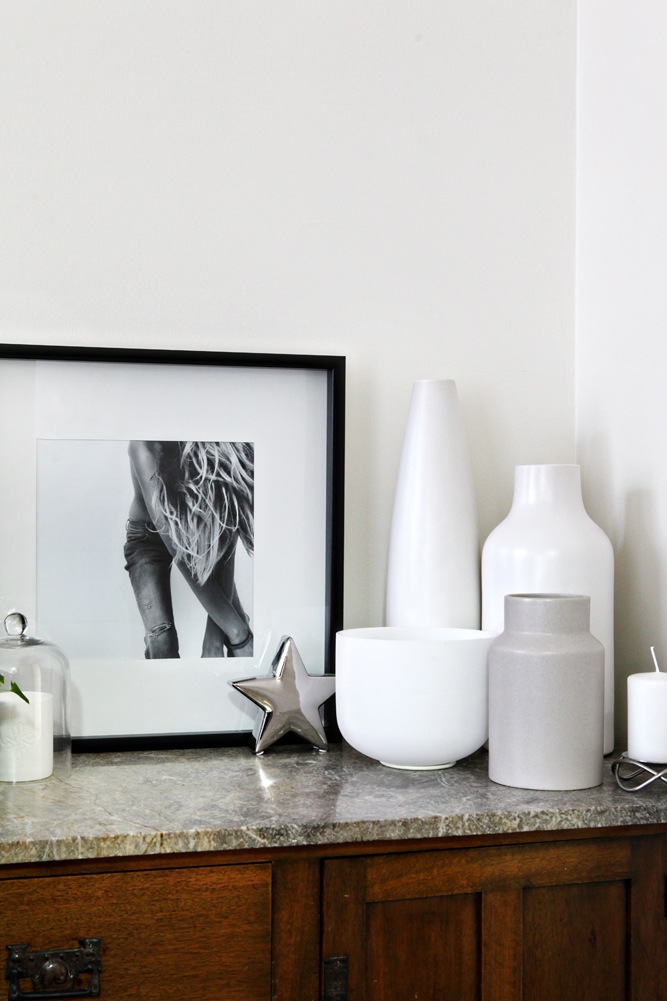 “The side table is actually one of the first furniture pieces my dad ever bought. He doesn’t even know if it was a junk piece; he found it and we’ve had it ever since. I find that every time I walk past this corner I feel the need to style it (laughs) every new piece I get tends to come here first before I work out where it lives permanently,” she notes. 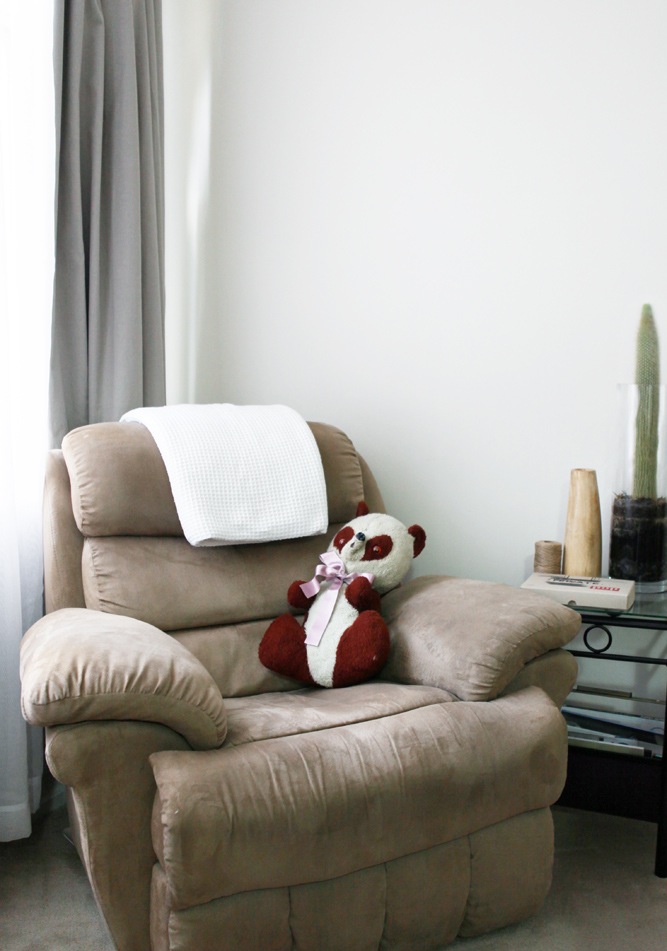 The cosy corner of the living room is where you’ll find Mr Dress Up. Photo – Tania Savage Production – Martine Harte.

“I’ve been attached to him forever, the ribbon was actually my great grandmothers, my mum gave it to me when we moved in as a house-warming gift. I don’t use ribbon very often so thought it belonged on him more than anywhere else. Now I was born in Canada and (Mr Dress up) was a tv host for kids, I absolutely loved him so that’s what I called him. He’s been dropped in the middle of a freeway and his head popped off and mum had to sew it back on again.” 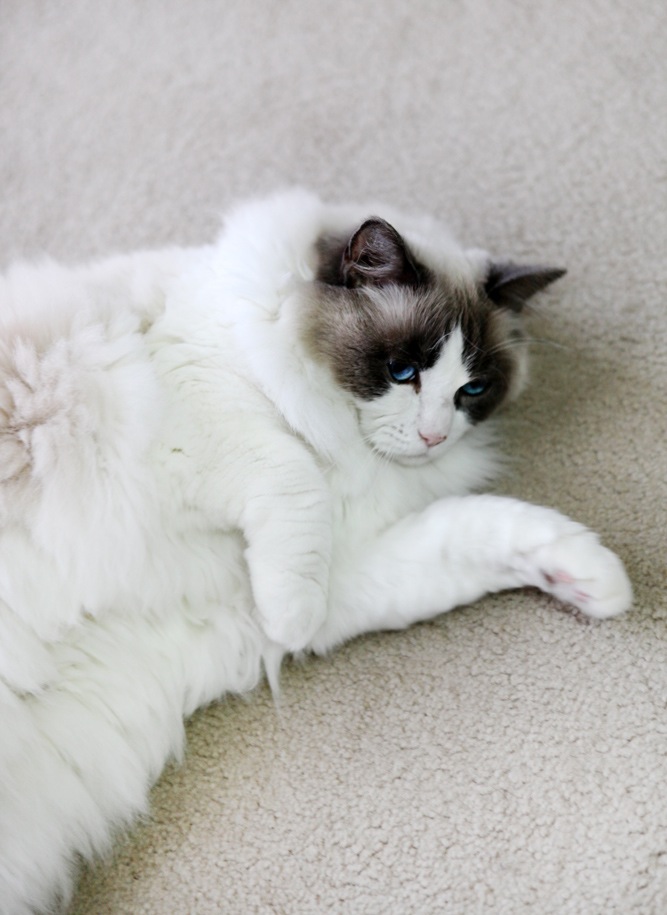 Heather has some styling principles which include:

Use restraint to uncomplicate your home life.

Use washi tape and blue tack to change your art around.

You don’t have to buy hugely expensive pieces.

However, the majority of what she does at home and work just clicks, “I generally just trust my gut when it comes to these things.”

Over at her blog HER Creative

She always opts for local brands, if you are curious about something you see in this post, get in touch! Comment away!

More inspiring homes can be found by tapping here