The Beaumaris home of artist Fiona Slater is brimming with beautiful artwork, including many of her own pieces. 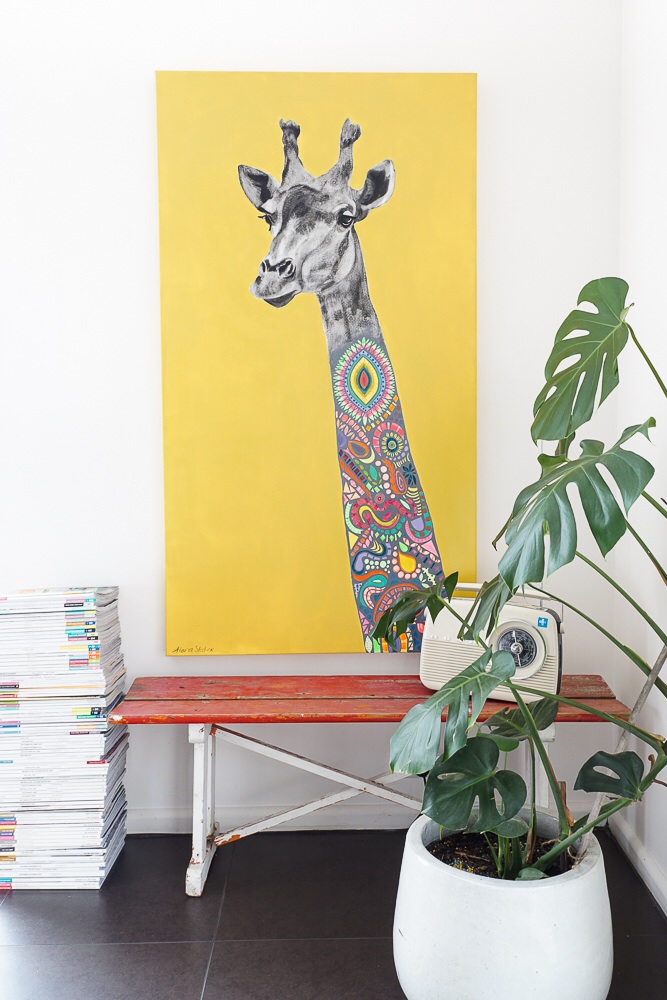 Looking back, Fiona Slater was probably always going to be an artist: she sketched in school, did a brief Fine Arts course and has sensitivity.

But the mother of three – Jovi, 5, Ava aged 7 and Mia,16 – has zig zagged her way to the successful commissioned artist she is today.

I was curious to discover at what point she picked up the brushes and how she found the confidence to give it a shot… it all began when she received this striking Charles Wrencher painting as a gift. 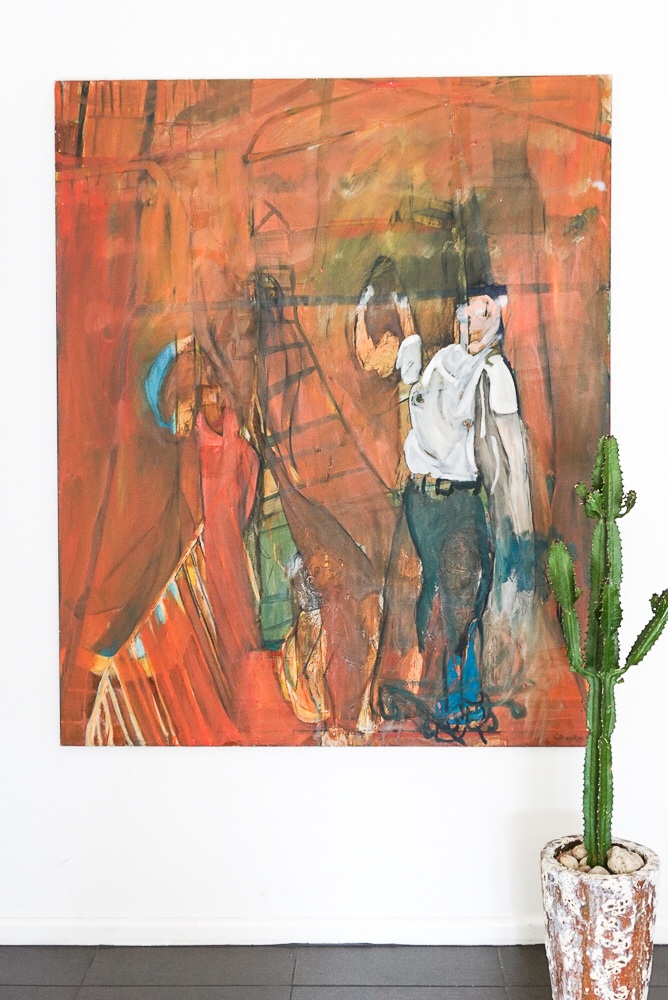 “Years ago I was living in Sydney and one of my girlfriends was dating Charles Wrencher, she gave me his work as a going away present. It has followed me from house to house and it’s one of my prized possessions. He finished it when he was studying at art school and now his work has evolved into something out of this world.

After I had my second baby I picked up hairdressing again and worked out of home, clients would see my paintings on the walls and that’s how life as a commercial artist began,” recalls Fiona. 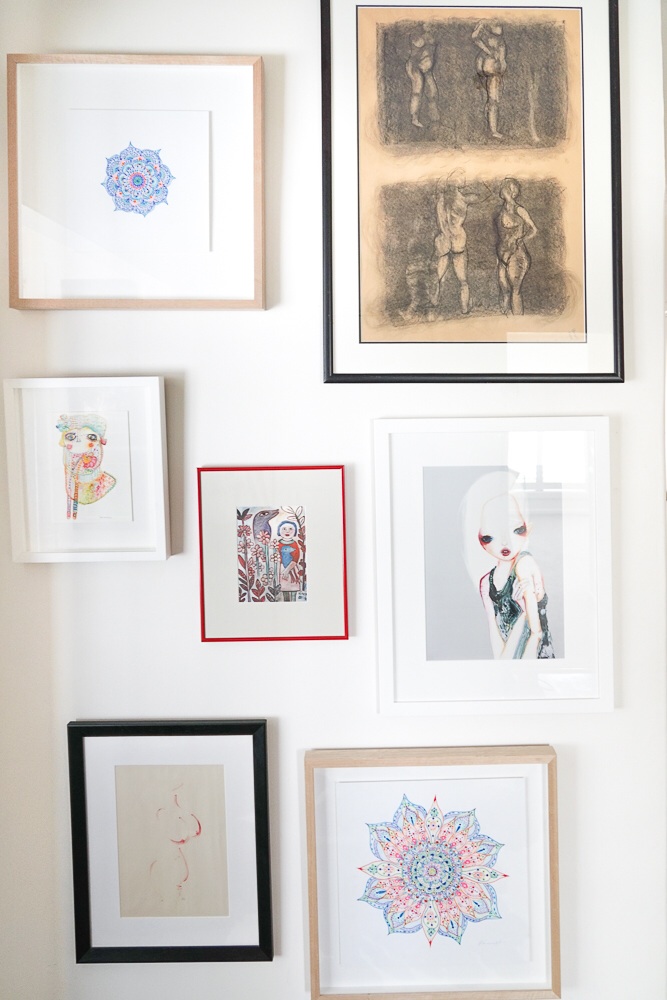 “I loved meeting Mirka at her exhibition. She’s one of these amazing women, who is absolutely an out there, free artistic spirit! I asked her what the birdlike creature in the painting was and she said, “Oh, penis envy darling!” 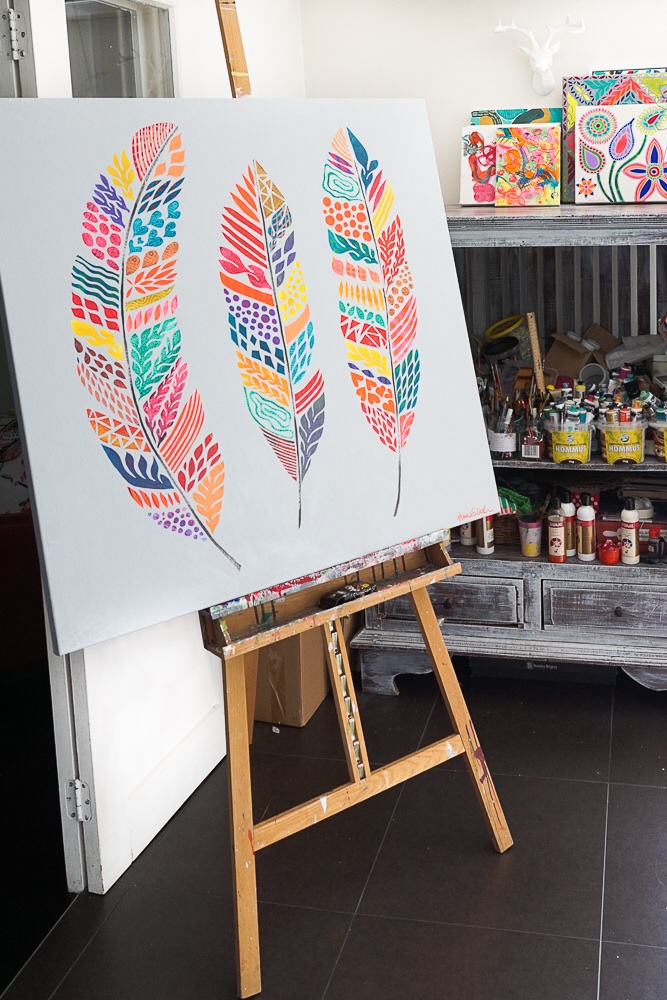 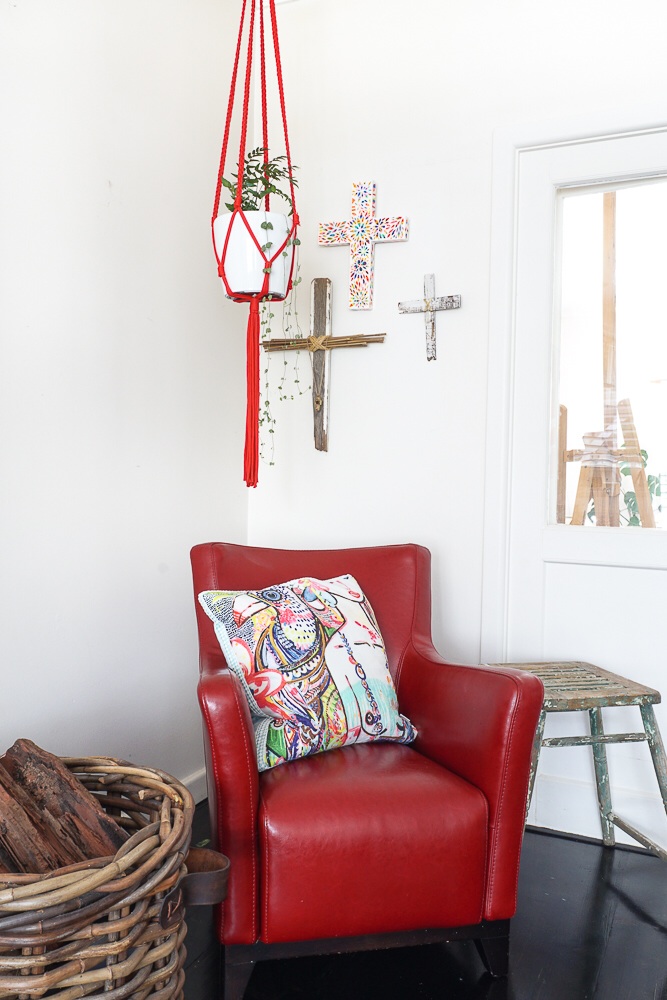 Reading nook near the open fireplace. 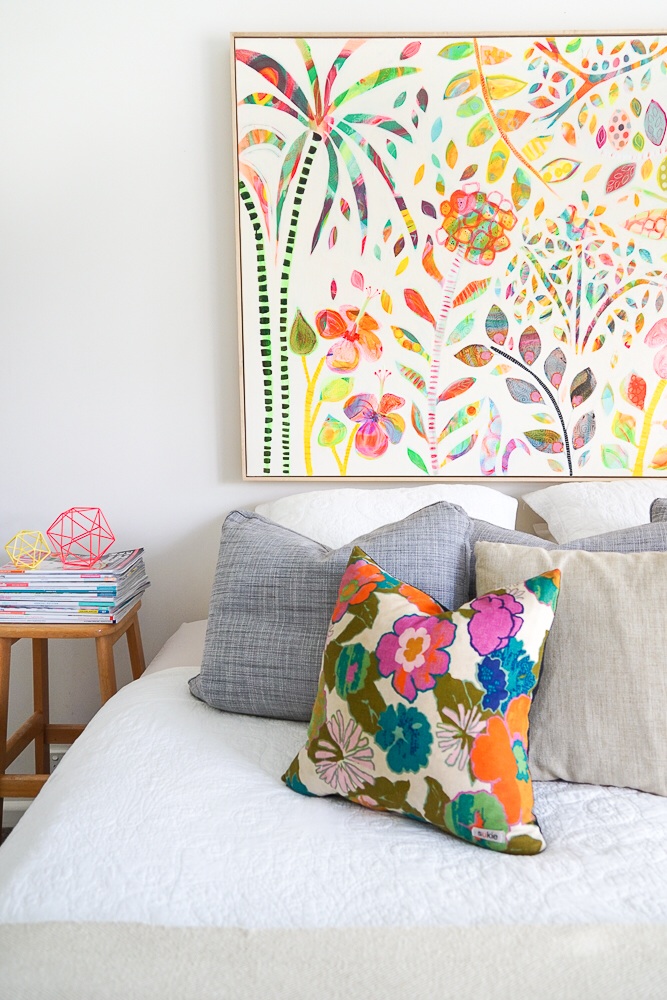 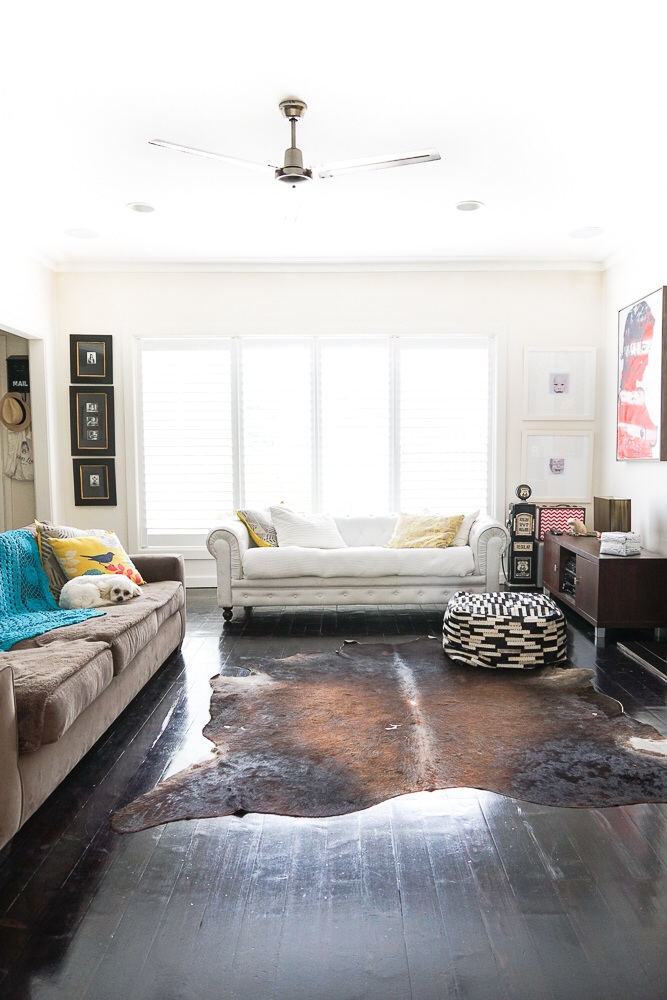 One of the ways Fiona increased her confidence to follow her artistic path was to tap into the wisdom of others in the art world. She met Australian artist Ben Quilty and had a total fan moment when she was face to face with another self-taught artist, Jane Donaldson.

“Jane was one of the very first people I started following on social media. I just loved her work and who she was, she’s so divine. I ended up dragging Carla (Slater’s bestie is Melbourne milliner and stylist Carla Murley) to an exhibition.

I was that nervous to meet Jane that I knocked over a glass and smashed it (laughs) anyway I ended up chatting to her, then her husband came over and said, “Oh maybe I could help you with a few questions and I burst into tears! He told me about his studio and he was basically just saying it is possible to paint with three children. I personally don’t paint when the kids are around, I just pump up the music when they’re at school,” says Fiona. 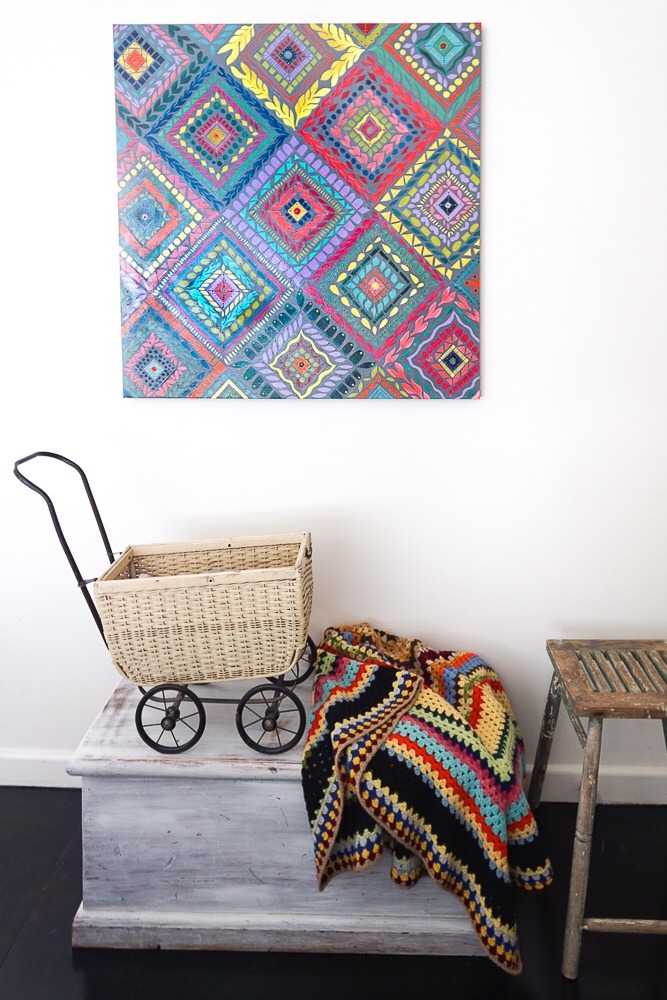 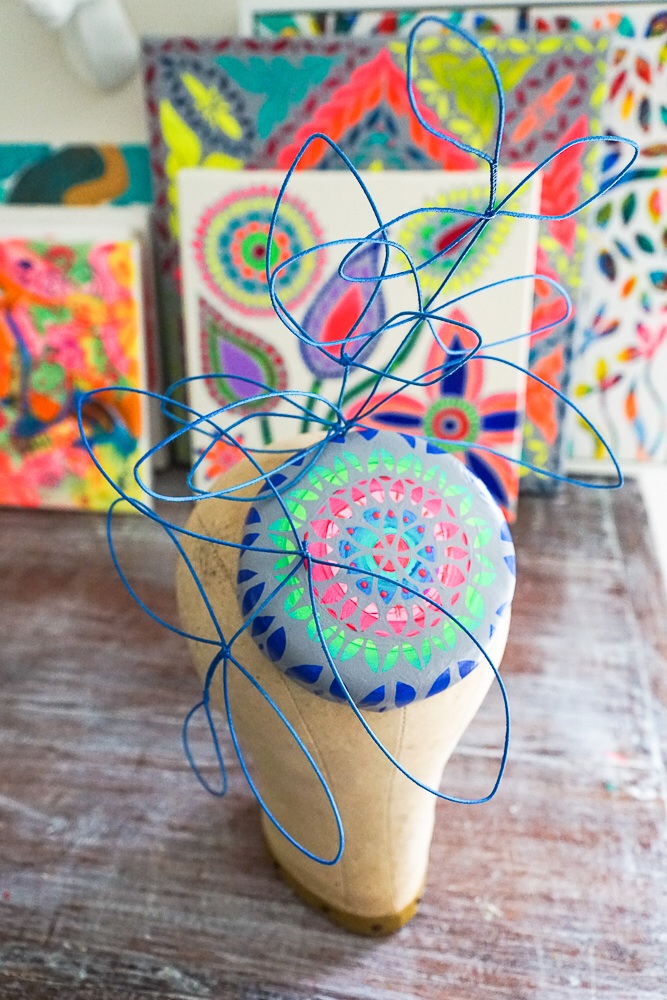 Results of a collab with her friend milliner and home stylist Carla Murley, the first in a series of five pieces which will be available in Spring 2015. Fiona used acrylic paint before Carla sealed it.  Production – Martine Harte. Photograph – Changwei Dean.

“The hats are one hundred per cent Carla’s brilliant idea. I think because some of my work looks like fabric she said, “Why don’t you paint the base and we’ll create something beautiful together,” recalls Fiona.

This vintage pram is a household treasure. Her dad, Andrew Slater played with it as a child and his mum hand knitted tiny doll clothes for her children and grandchildren. Photo – Changwei Dean. Production – Martine Harte. 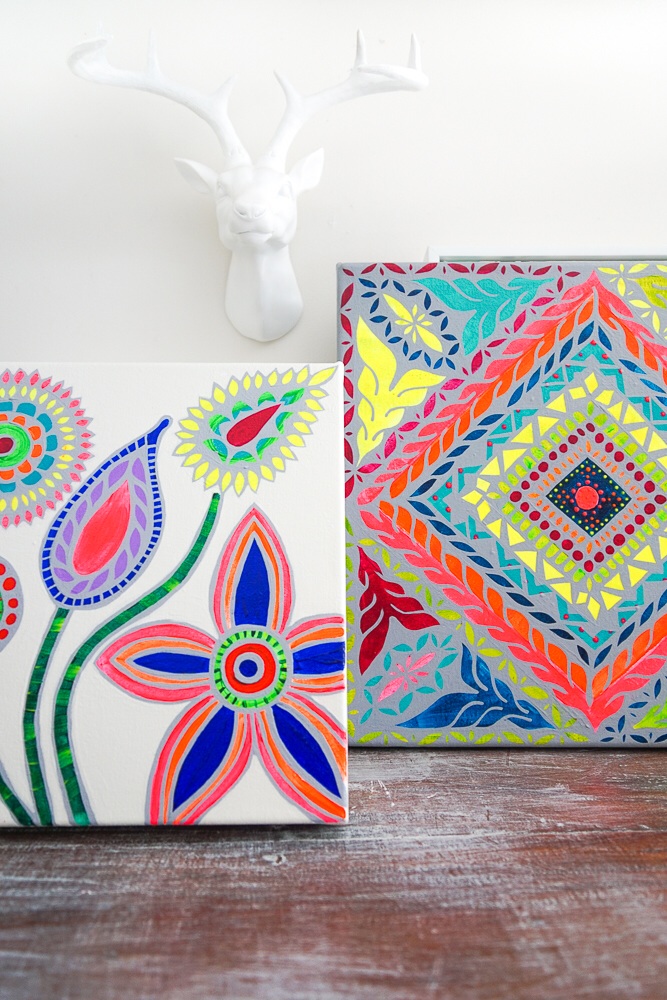 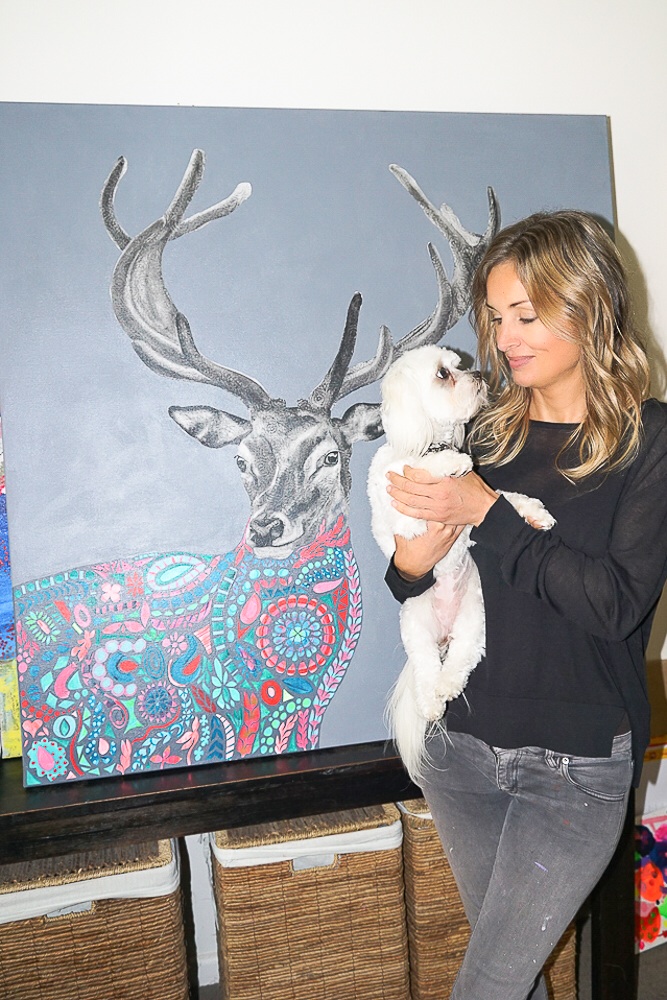 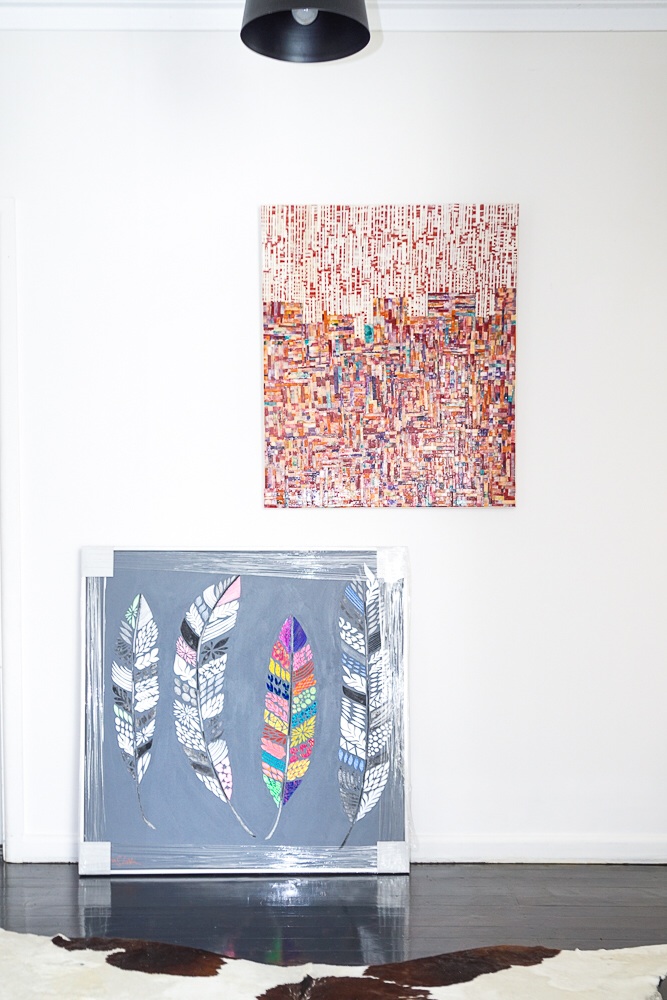 Being asked to create the work above has proven to be one of the most touching moments of Fiona’s journey,

“It represents a family tragedy; the parents asked me to paint the bright feather to represent their child who sadly passed away. As I was sketching it up I had tears in my eyes. I like my work to draw out the personal meaning for each client.” 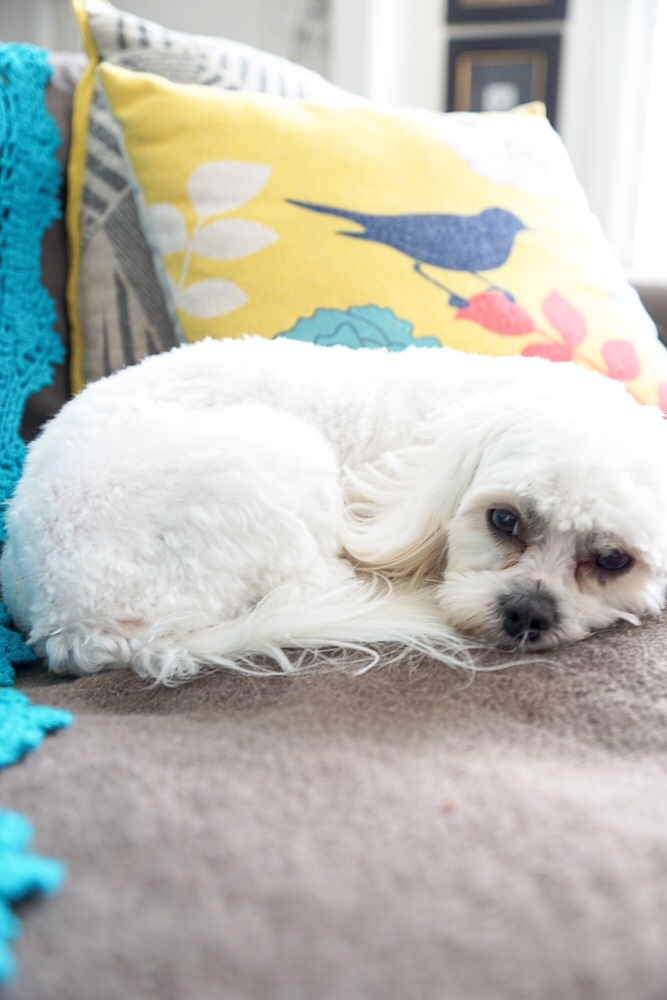 HOOK UP WITH FIONA: