Expect the unexpected when you walk through the doors of this rock star Australian home. 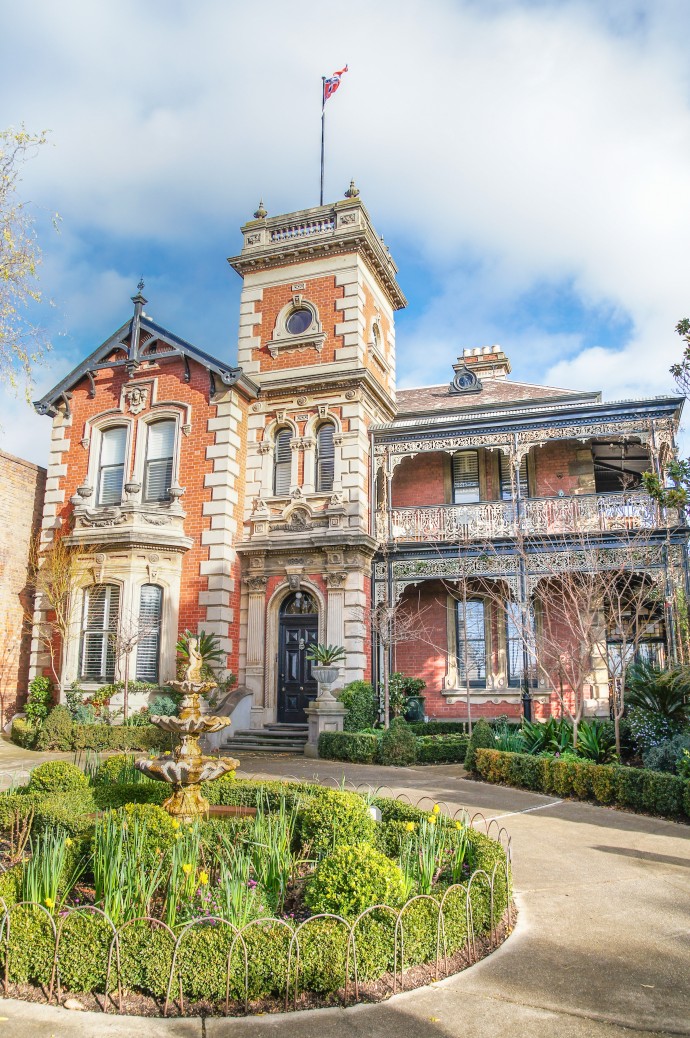 It’s playful, contemporary and influenced by a bond between two creative souls; home owner Caecilia Potter and her mother Julie.

Caecilia Potter remembers her mum as a woman who created special moments in everyday life; candles at dinner, cut flowers from her garden, music and a love of books. Come on in, absorb each fantastic room and see how the ‘celebratory gene’ has been passed on. 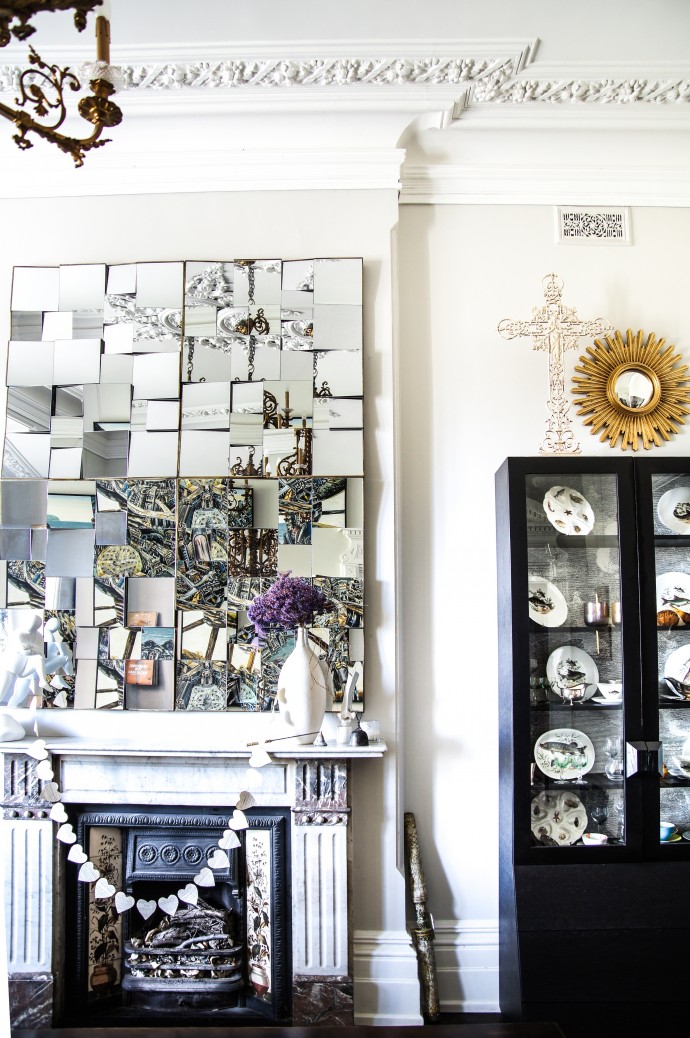 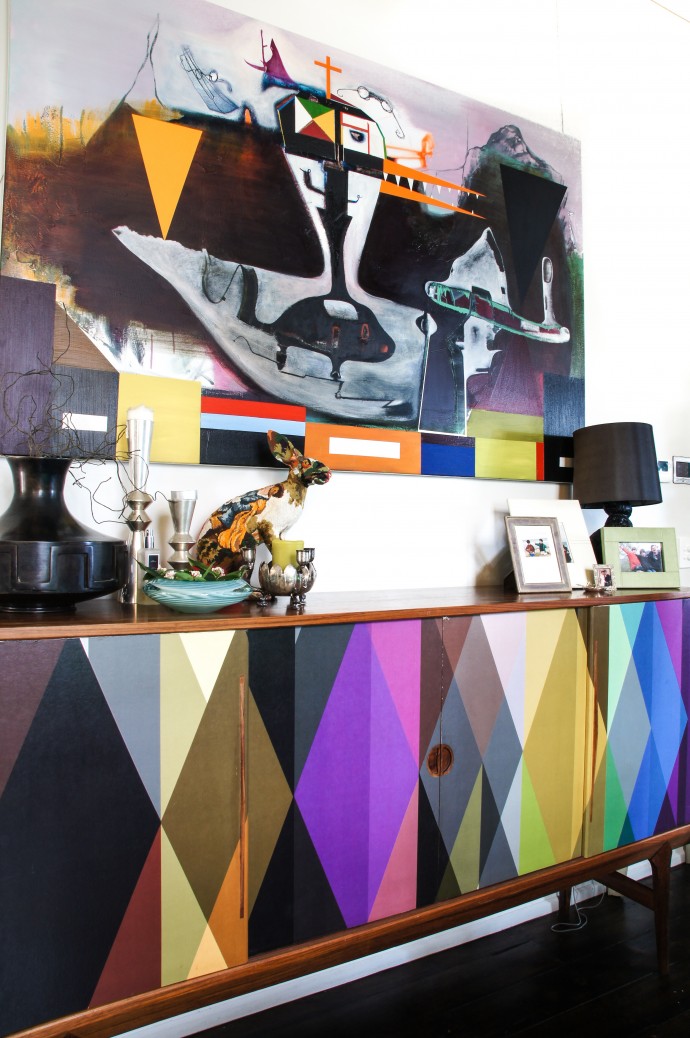 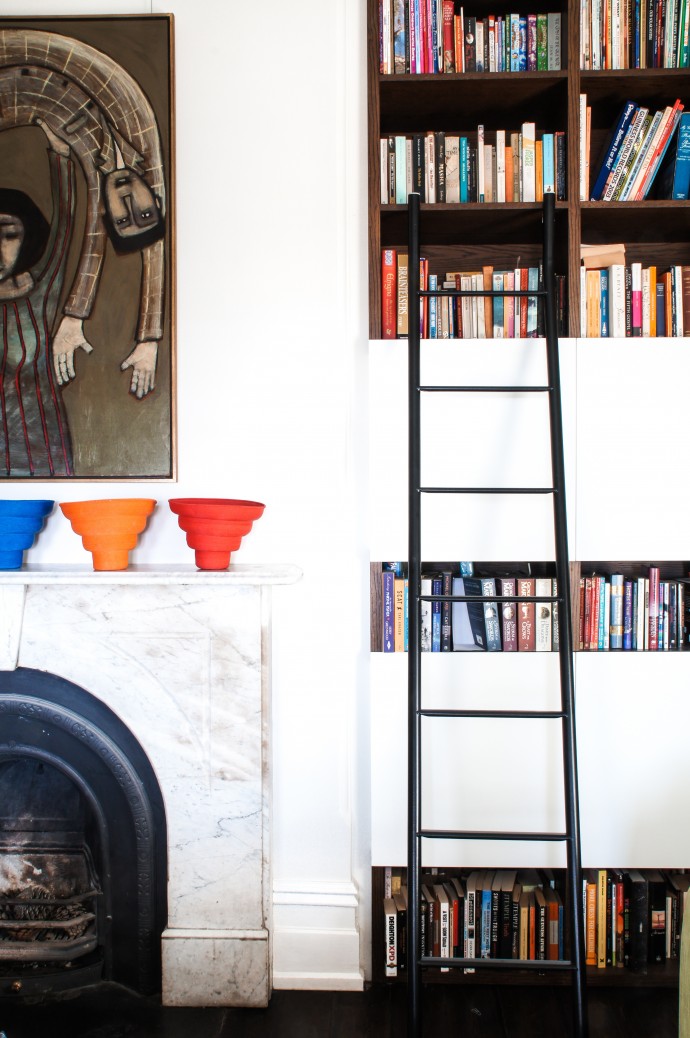 The Potter’s were originally “just going to have a look” at the home in Melbourne’s Hawthorn. “I went up in the tower with Cyrus and there was a gentleman and his wife (in their fifties) and she said to him, “Oh look I don’t think they’ll let you knock it down because it’s heritage listed.” He mumbled something and then Cyrus came down the stairs with me indignantly and said, ‘Why would anyone want to knock this down? Mum it’s terrible.’ It’s the first house we showed Jasper that he showed any interest in, he really connected with it,” recalls Caecilia. 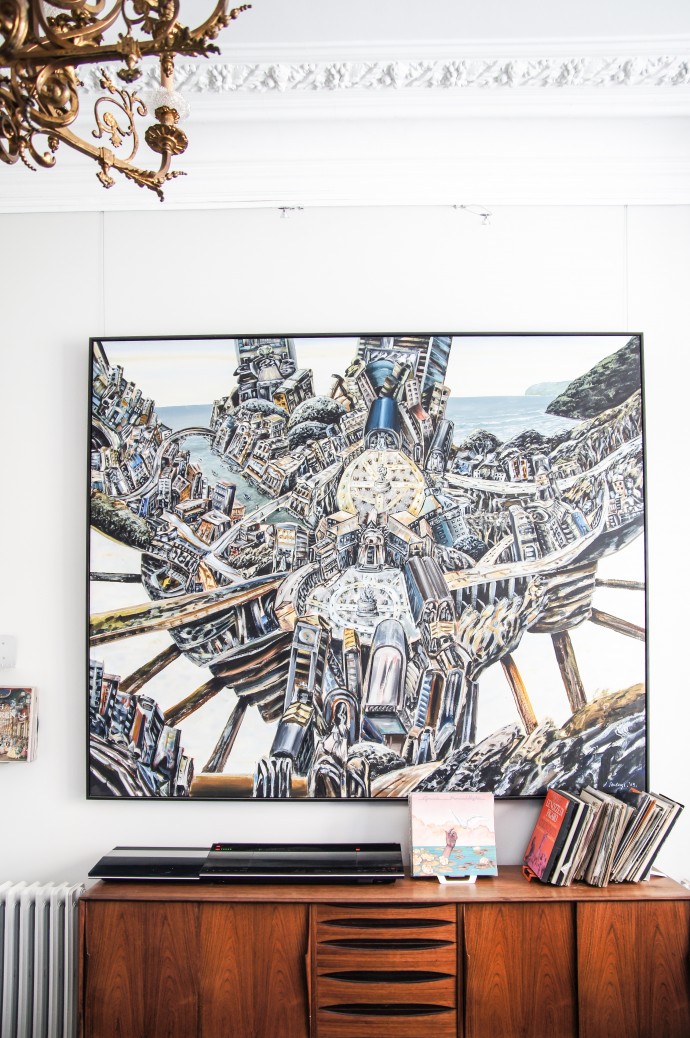 “We’d just got back from a trip to Venice and the view from one side of the painting is almost like the view from our beach house in Fairhaven and the boys loved it. It’s been such a lovely thing to have in the dining room because I always think the dining room is one of the most special rooms, family meals are really a big part of how we connect with the kids.” 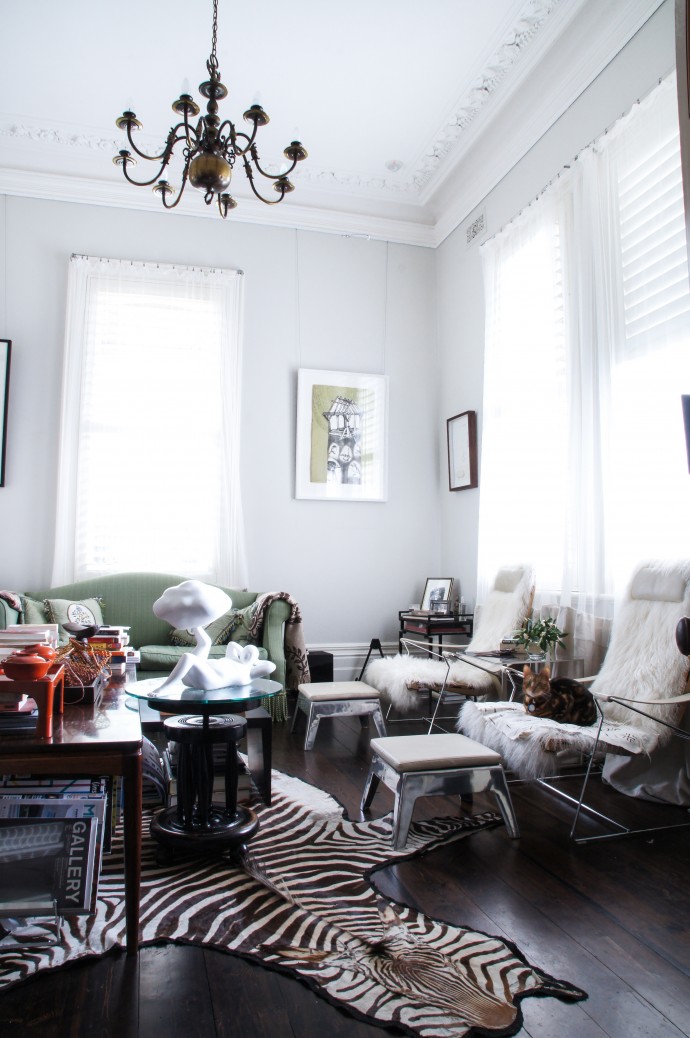 As Design Director of architecture, interior and landscape design practice Atticus & Milo, Caecilia doesn’t have a ‘signature style’ she believes a home is created by layering spaces to reflect a client’s individuality. Her home is full of wonderful conversation starters yet isn’t pretentious. 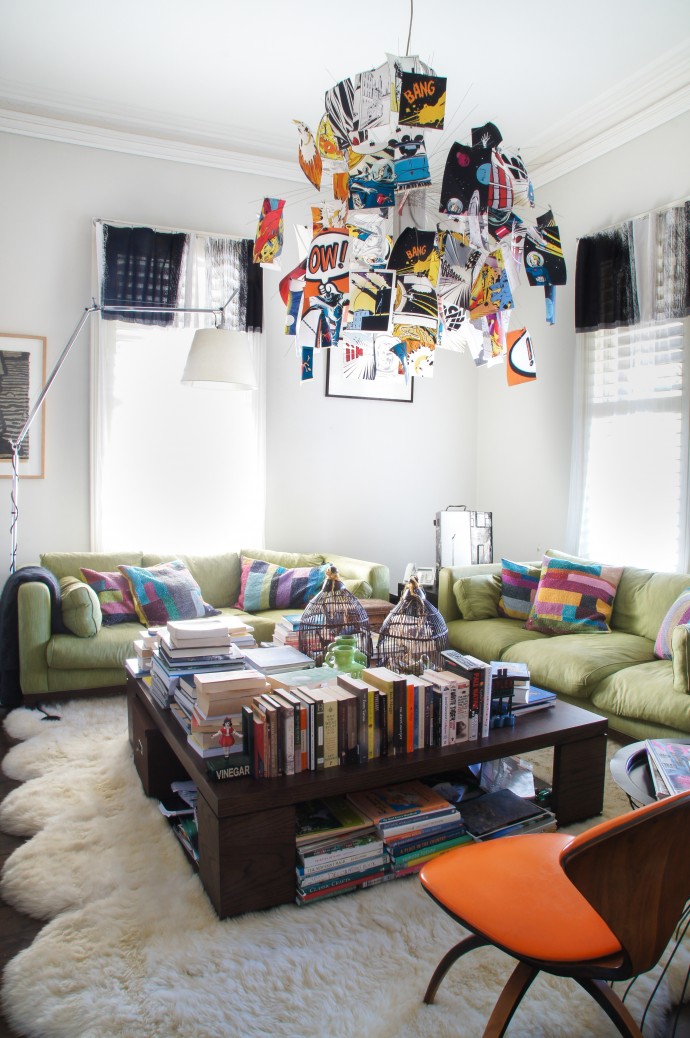 “I also really like the upstairs den, it’s the boys den but it’s more like the family room, so we often snuggle up in here for a movie.” 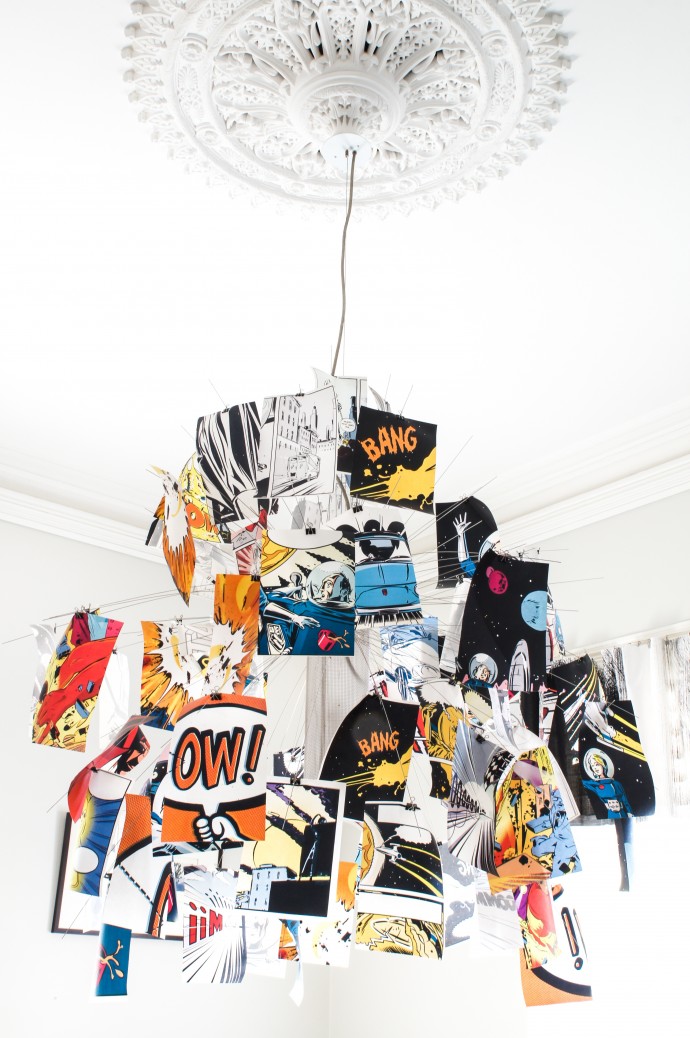 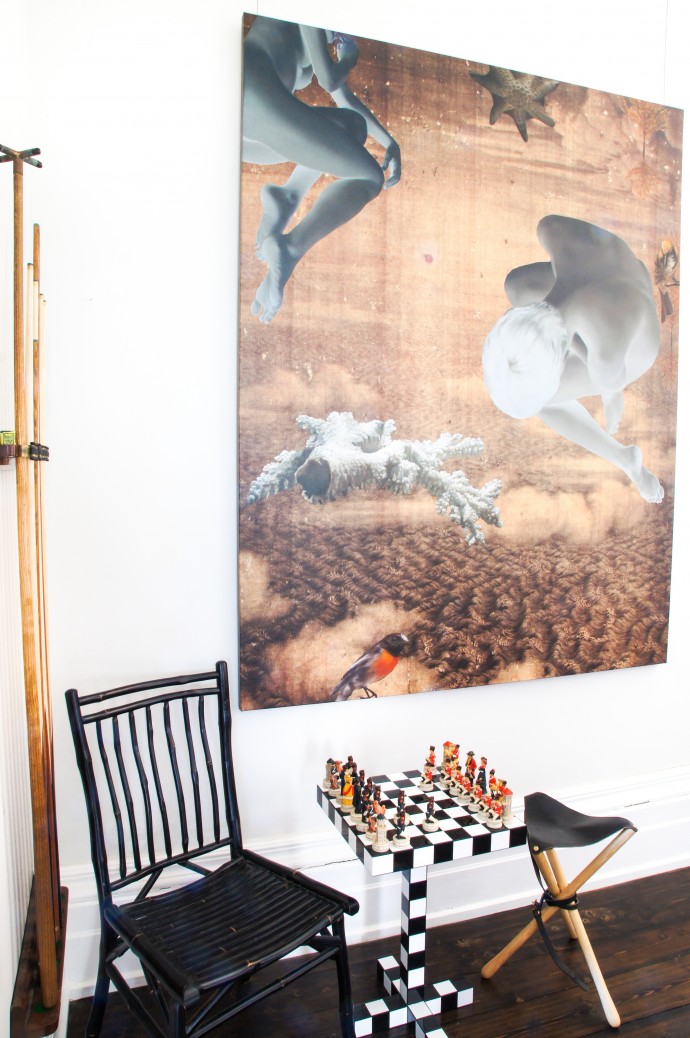 “I love this painting from his double ground series, the background appropriates the last painting of Guiseppe Castiglione a Jesuit missionary who was caught up in the Emperors court and never allowed to leave China. Hong Kong Chinese Australian John has also experienced the alienating experience of being an immigrant/emigrant.” 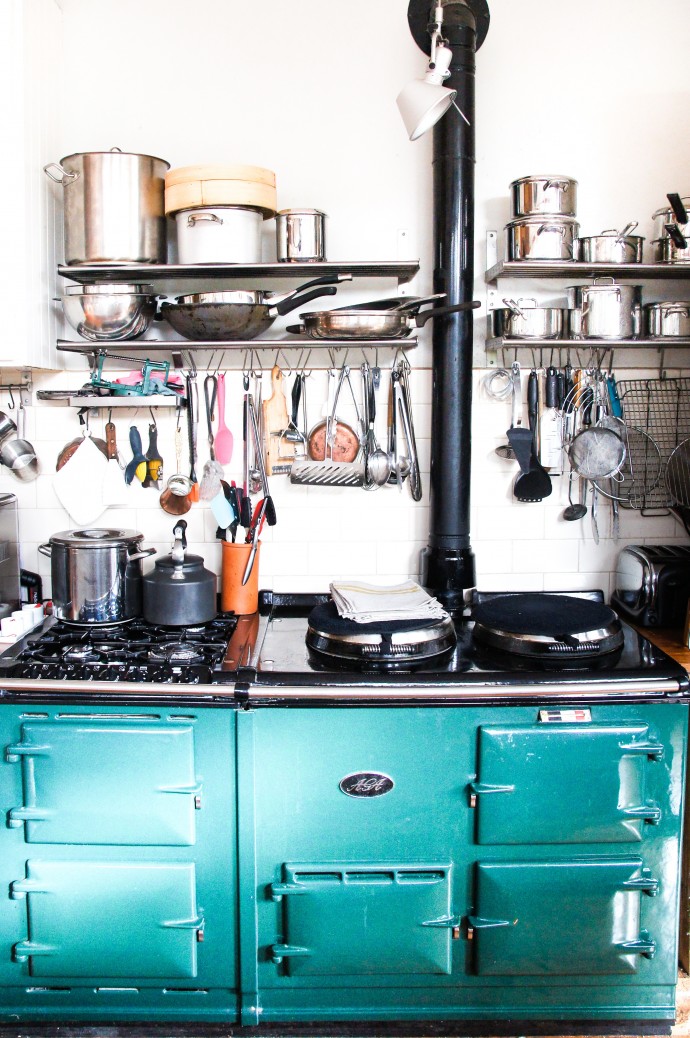 “It is such a more intuitive, sensitive way of cooking. It was designed by a Swedish engineer in the early 20th century. He was blind so he designed it to always know the location of what’s grilling and roasting, what’s baking, what’s simmering, poaching. It becomes your heater, it does the ironing, it does the drying, we don’t use our dryer. It seriously is like a person, I’ve just fallen passionately in love!” 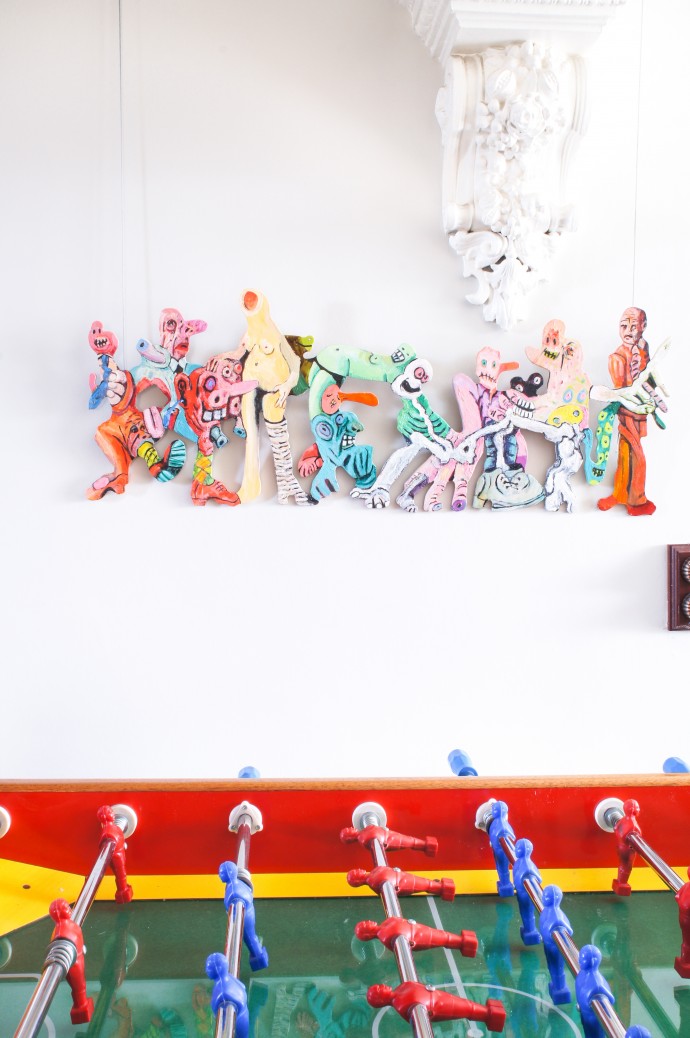 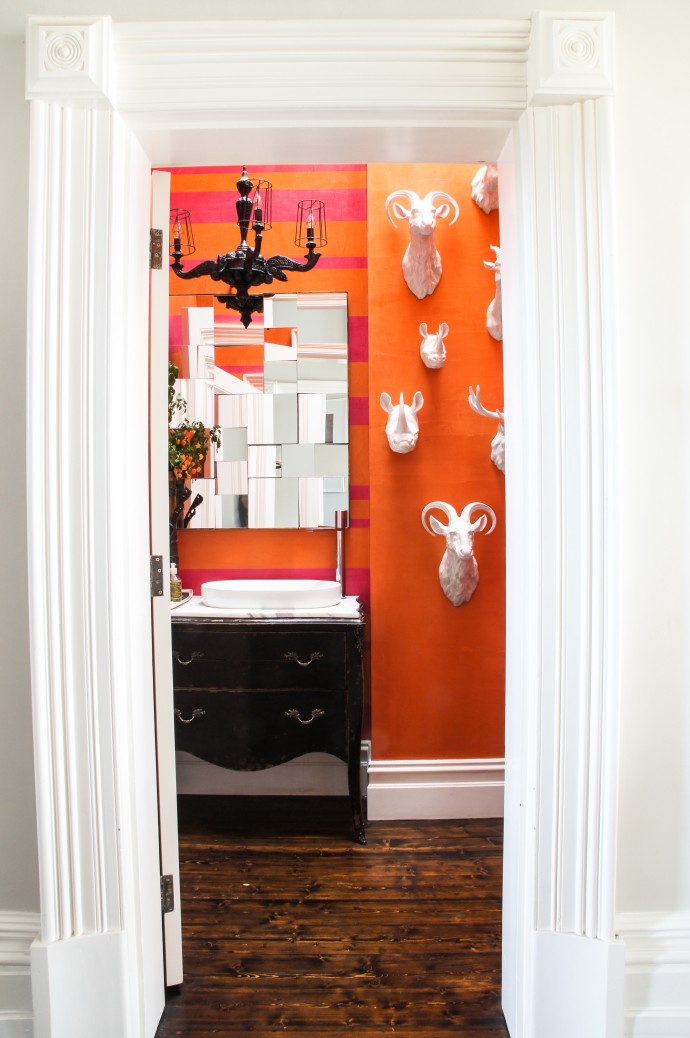 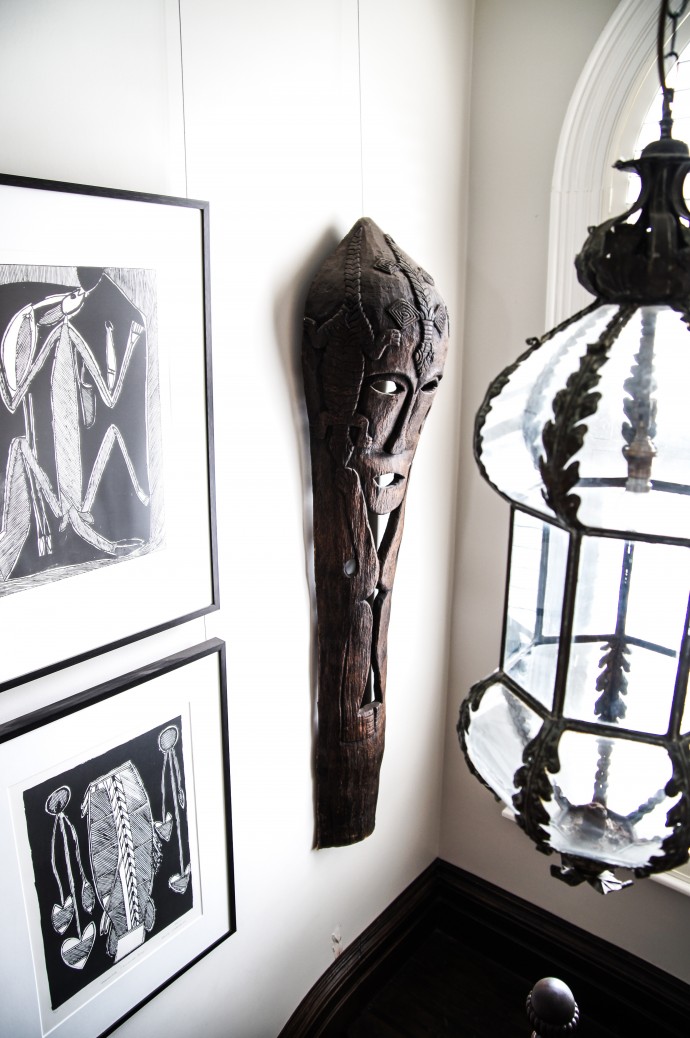 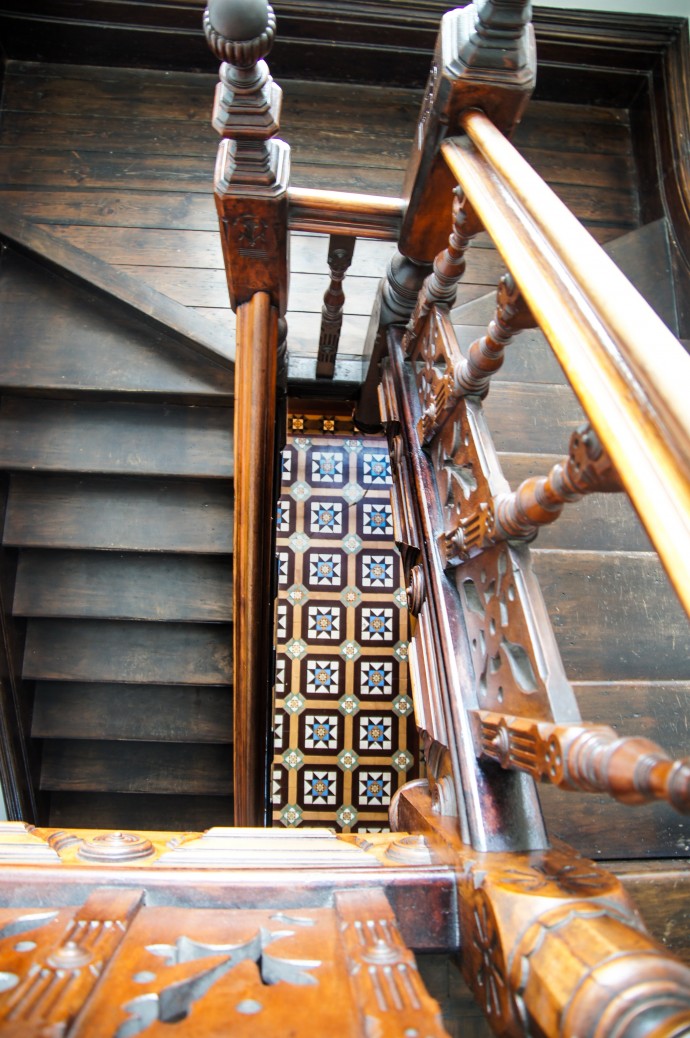 Caecilia loves the ‘modesty panels’ on the staircase designed to obscure ladies ankles from stray glances from ungentlemanly gentlemen – as they ascended the stairs! 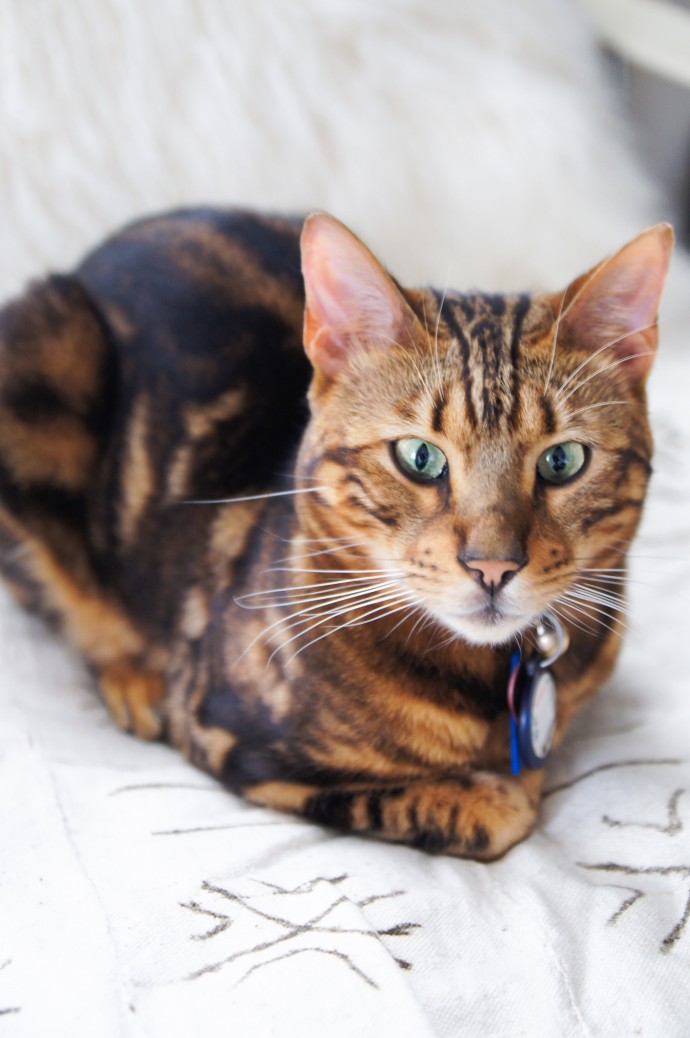 “One of the things I absolute love about the house is because we haven’t done the typical big box it feels much more purposeful. You decide to come into here and sit down and read a book or something. All the rooms get used.” 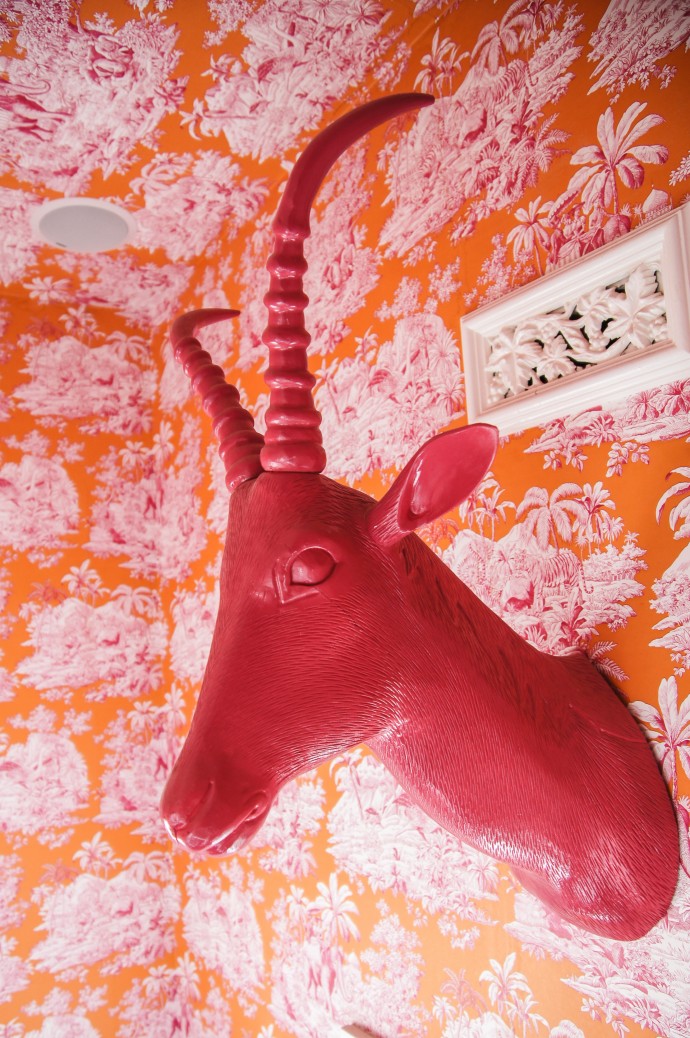 “The house is called Huntingtower and given the Yarra River is really close it is highly possible it was used for viewing. We did this wallpaper cause it’s got all this crazy hunting stuff and I loved the colour.” 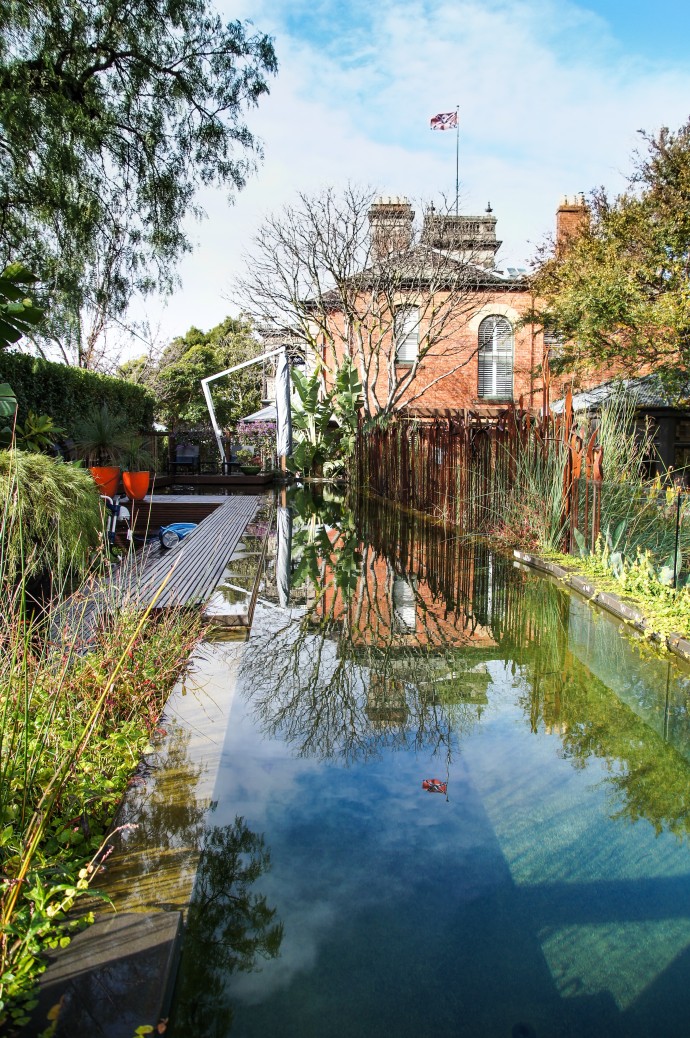 The garden with its natural swimming pool, cleaned by a natural eco-system using German technology. See if you can spot the reflection of the pirate flag captured by the lense of Changwei Dean. Production – Martine Harte.

“We often get notes in out letterbox from people saying, I drive past your house most days and it just gives me a little kick to know what flag you have up. I particularly like the pirate flag and the Aboriginal flag,” says James.