You’d be hard pressed to find an Australian who doesn’t hold a degree of affection for Dame Quentin Bryce.

This month, she has drawn back the velvet rope on a wonderful collection of letters she wrote and received during her six-year term as our first female Governor-General.

I bought not one, but three copies of ‘Dear Quentin, Letters of a Governor-General.’ 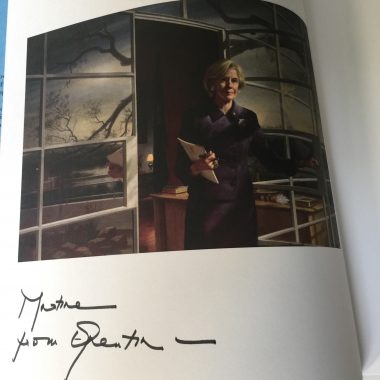 Image: Photo from Dear Quentin, Letters of a Governor-General.

Quentin Bryce’s affection for her influential mum is apparent from the first page:

“My mother,” she writes, “could do anything.”

On Sundays she wrote letters at a large Indian teak desk trimmed with studded snakeskin in our living room, never used for any other purpose. On it a few photographs, flowers in a white jug, blotting paper folded, the usual accessories; a holder for paper and envelopes – a holder for paper and envelopes – but they were kept empty. Her stationery, bought at the Finney’s sales twice a year, stayed in its sturdy boxes in the drawers. My mother liked a soft cream, the colour of my own paper. Her envelopes were lined with the finest white tissue. Her favourite brand was Elco from Switzerland, definitely no decoration, no deckled edge. She used an ordinary-looking push pen with a ‘J’ nib dipped constantly in and out of a bottle of Quink ink, never a drop spilt. My own is a small, heavy, black and silver Mont Blanc, one of my most treasured possessions. It was given to me by UNICEF some years ago when I did a handwriting project for them. I fly into a panic when I mislay it.”

She wrote no less than 50 letters a week to Australians from across society.

There was the exchange from former prisoner of war, Leslie “Bunny” Glover, who wrote of his enjoyment at watching a belly dancer at his 59th birthday party:

“My health is slipping backwards now I am on the verge of getting old. I will have to give up pole dancing as I am slipping off poles now.”

Then her correspondence to feminist Anne Summers who wrote the famous book Damned Whores and God’s Police.

“To my dear Anne,

The page side bar explains how she first met Anne in the 70s,

“I was on the National Women’s Advisory Council and was immersed, in both my pubic and private life, in all the things that Anne was trying to change and improve: women teetering on a tightrope balancing wrk and little children, law reform in juvenile justice, the emerging children’s rights movement – the whole catastrophe of those times that came with trying to do it all at the same time. Anne’s landmark publication had a powerful effect on me and on many women.”

Then there was the note from Trooper Mark Donaldson, Victoria Cross recipient which she describes as, “A great occasion for our country.” Letters to Prime Ministers, Indigenous elders, Girl Guides and her grandchildren.

And little Brooke Weir who named one of her calves Quentin in honour of the GG.

She wrote longhand and each of them reveals the essence of the woman: her commitment, discipline, kindness, importance she placed on making a contribution to society.

Royalties from the book will be donated to the Murdoch Childrens Research Institute.

The collection is published by Melbourne University Press with stunning photos you can pick up your copy (what a great Mother’s Day gift!) here

During her book tour to launch this collection she again left us with her intellect, compassion and wisdom with this:

“I often say to women, you can have it all but not at the same time. I remind young women that they have a very long way ahead.

The best advice I have is how important it is to take good care of yourself and to leave time for relaxation and refreshment.

Quiet time to refresh ourselves with art, music, poetry and creativity is how we develop resilience.”

Read about the work of the Murdoch Children Research Institute in our interview with one of its incredible women scientists here.