She was the first woman to be elected to the Northern Land Council and was appointed co-commissioner for the NT to the panel of the Stolen Generations Inquiry.

In short, she dedicated her life’s work to progressing the relationship between Indigenous and non-Indigenous Australians.

Today marks the start of National Reconciliation Week and sadly Ms Mills assessment of our progress is bleak:

“This has been a marathon for me and for the Aboriginal People of Australia. It’s very sad because we’ve never reached the point of truth and sharing.

We’ve had our national apology we thought we were going to surface from there.

But an apology without restoration is null and void.” 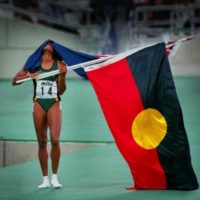 Image: Cathy Freeman unites the nation through her sporting prowess.

National Reconciliation Week starts today with the theme, ‘Grounded in truth: Walk together with courage.’

May is a significant month in Indigenous history.

On 27 May 1967, our nation approved a referendum which enabled the Commonwealth government to legislate in Indigenous affairs and granted Indigenous Australians the right to be included in the Census.

The week is designed to bring us together, acknowledge the past, and engage in reconciliation going forward.

Australia remains one of the only countries in the Commonwealth without a treaty; our neighbour New Zealand once again can teach us some valuable lessons.

Newly elected Prime Minister Scott Morrison must show leadership on this issue; if he does his legacy could mirror that of the recently passed Bob Hawke.

Mr Morrison has the mandate within his party to be the change-maker and allow Australia to show the world we are driven by respect.